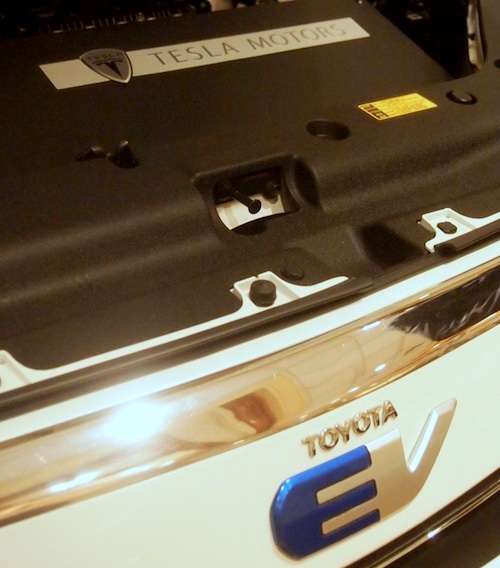 The new Toyota RAV4 EV is the result of the Tesla-Toyota partnership, features a Tesla-provided electric drive train, and is an all-electric SUV built on a RAV4 chassis, manufactured by Toyota, specifications to be unveiled next week, and launch expected in July 2012.
Advertisement

Two years ago Toyota and Tesla excited the electric vehicle scene by announcing a partnership which saw Toyota joining Daimler in investing in Tesla, Toyota selling a disused factory to Tesla (the former NUMMI plant in Fremont), and agreed to work with Tesla on resurrecting the Toyota RAV4 EV. Today Toyota announced that the new RAV4 EV would be unveiled at the EVS26 conference next week, putting the company on track to fulfill its promise of shipping the electric SUV in July 2012. EVS26 is the big kahuna electric vehicle symposium featuring speakers and participants from all over the world.

The Toyota RAV4 EV is an all-electric version of Toyota's popular RAV4 SUV. Instead of a gasoline powered drive train, it sports an electric drive train built on parts supplied by Tesla Motors.

The RAV4 EV has a long history in the electric vehicle scene. In the 1990's and early 2000's, during the period when California's ZEV Mandate had teeth, the first RAV4 EV was Toyota's answer to that mandate. It was essentially a conversion vehicle, a thousand or so of which were built by Toyota engineers. For its time it had some amazing characteristics. This included a Nickel-Metal-Hydride battery pack (NiMH), highly advanced for its time, allowing that electric SUV to have well over 100 miles of driving range, and it played a bit part in the movie, Who Killed The Electric Car. While Toyota did move to retrieve and crush those RAV4 EV's when the ZEV Mandate was gutted, the DontCrush campaign successfully rescued hundreds of the cars, most of which are still on the road today.

Unfortunately we won't know the specifications of the new RAV4 EV until next week, but a few bits of information are known.

When announced two years ago, Tesla had built one prototype RAV4 EV and promised to build several more. In the time since, Toyota has paid Tesla $100 million to supply the RAV4 EV's electric drive train including battery, motor, gearbox and controller.

The original announcement came on the heels of Tesla's purchase of the former NUMMI plant from Toyota. At the time it seemed plausible that the RAV4 EV would have final assembly done by Tesla in that plant, using car bodies provided by Toyota. Instead the RAV4 EV is being manufactured by Toyota in Windsor Ontario, at the same factory that builds the gas powered versions.

We were able to see a Toyota RAV4 EV prototype at the IdTechEx Electric Vehicles meeting last month. That car was built on a current RAV4, a model that's six years old. It is unknown whether the official RAV4 EV will be built off the existing RAV4 base, or whether it will be built on a new RAV4 base vehicle. The prototype vehicle had Tesla Motors markings on all the components under the hood, but was festooned with Toyota branding on the outside. No space in the passenger or luggage compartment were consumed by the electric drive train, presumably the battery pack is located underneath the passenger cabin just as it is in the Tesla Model S. The charging port, located under flap on the drivers side rear, used the Tesla-proprietary charging socket rather than the industry standard J1772.

Because it uses the Tesla-proprietary charging port the new RAV4 EV is likely to offer the 10 kilowatt charging rate that comes standard with the Tesla Model S, and might support the Tesla-proprietary Supercharger protocol. Tesla specifies the 10 kilowatt charge rate as providing up to 31 miles of range per hour of charging, and the Supercharger provides up to 320 miles of range per hour of charging. However both charge rates require charging stations using Tesla's proprietary charging connectors. The Tesla Model S comes with a J1772 adapter for access to the public charging network, but at a slower charging rate. Toyota could surprise us that the official RAV4 EV comes solely with a J1772 port, but if so the company would miss out on a chance to have a charging speed advantage over competitors.

A Toyota spokesperson at the conference broadly hinted the driving range of the new RAV4 EV would be over 100 miles. This would be shorter than is typical for Tesla-designed electric vehicles, but Toyota's strategy is to aim for affordable vehicles rather than the best electric vehicle regardless of cost. In large part Toyota's reluctance to build a proper electric vehicle for so many years, even in the face of DIY Plug-in Prius conversions, was due to Toyota's pricing strategy. We predict the range of the RAV4 EV will be closer to 100 miles than the 200-300 miles one expects from Tesla Motors. The same spokesperson, when asked of the price, broadly hinted a price range by reminding us the original RAV4 EV cost $42,000.

The RAV4 EV will be initially launched in, no surprise here, California with other states to follow as demand grows. Why? The answer given is that there are no ulterior motives, but that both Tesla and Toyota engineers are located in California, making it easier to deal with any issues that should arise. Another obvious reason for "Why California" is the ZEV Credits that Toyota will earn by selling an electric vehicle in California.

The spokesman quoted above said Toyota is excited about the new RAV4 EV, calling it a game-changer. Joining a Toyota SUV with magic Tesla pixie dust under the hood, a 100+ mile range, a relatively fast recharge time (via a Tesla-proprietary charging station), and a price around $50,000 sounds like the makings of a game-changer.

William Korthof wrote on May 1, 2012 - 2:07am Permalink
This is good news, but I'm not all that excited. My 10-year-old "vintage" RAV-4 EV continues to work great, offering me just as much range and utility as it did the day I drove it off the lot, and about the same as this new one. The new version looks great, and would be perfect for anyone ready for a practical electric car with cargo space in SUV format.
EV me wrote on May 1, 2012 - 3:21am Permalink
No space in the passenger or luggage compartment, 100+ miles, RAV4, game changer at maybe 30K . @ 50K, I wouldnt be going in to mass production.
Bali Sortik wrote on May 1, 2012 - 11:32am Permalink
You only read half the sentence: " No space in the passenger or luggage compartment were consumed by the electric drive train." Although I agree $50k is ridiculous. Toyota better hope there are a lot of environmental enthusiasts out there with a lot of spare cash, no math skills, and no taste in styling.
Bill Carey wrote on May 1, 2012 - 12:14pm Permalink
So, we'll see what the market is for $50,000 SUV's that can't go more than 40-50 miles from home. A game changer electric car of any type worthy of mass production will have to have a >200 mile range and a competitive price. Looks like we're a long way away from that.
David Herron wrote on May 1, 2012 - 1:30pm Permalink
"can't go more than 40-50 miles from home" demonstrates that you do not know about the public charging infrastructure, nor the importance of the charging rates I mentioned. The range of the thing is probably going to be over 100 miles, so half that is.. uh.. 55 miles? 60 miles? Hard to say for sure until the specs are released next week. In any case, if there were no public charging infrastructure, then the effective range of an electric car is one half its total driving range. Or, as you say, "can't go more than ___ miles from home" But there is a public charging infrastructure. And this means an electric car can go further from home than 1/2 it's full range, simply by stopping at a public charging station. The faster the charge rate, the more useful is the public charging stations. The Tesla charging connector supports a high charging rate but unfortunately it's proprietary and not used in the public charging infrastructure. Tesla supplies a J1772 adapter with the cars it sells, and presumably Toyota will supply one with the RAV4 EV. Toyota would have been incredibly stupid to do otherwise. But, when using a public charging station the RAV4 EV would have its charge rate limited by the power of the charging station, which is probably going to be 30-40 amps. Finally - "Game changer" - I tend to agree with what you say. The phrase is what the Toyota person spoke, I simply repeated it in the article. We'll find out what they meant next week. It starts to be a game changer with the potential for fast charging.
William Korthof wrote on May 1, 2012 - 1:48pm Permalink
People were skeptical when I paid almost $50,000 for my 2002 RAV4 EV, but after rebates, fuel savings, and the very low operating costs, my lifetime costs were probably lower than if I had purchased a boring old gasoline powered econo-box. Also, there was so much demand for the RAV4 EV cars after the program closed (only on the market to the public for 6 months), that they typically resold for $40,000 to $50,000 even up to 2009---an amazing lack of depreciation for 7-year-old cars that were supposedly "dead end technology" if you listen to the lame stream automotive press or faux news.