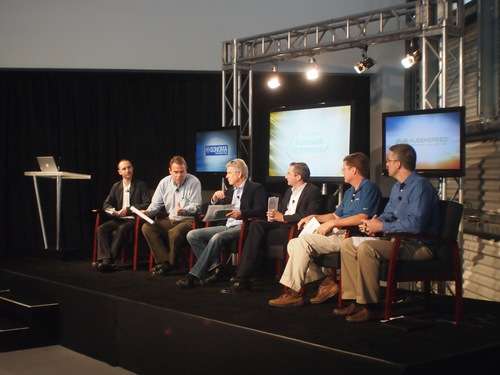 The new Sustainable Performance Ranking Metric attempts to identify the "sustainable" cars (low emissions) that have high performance, for those of us who do not want to give up on fun while driving green.
Advertisement

Yesterday, at Sonoma Racway's 2nd annual Accelerating Sustainable Performance summit, the "Sustainable Performance Ranking Metric" was unveiled. The question asked is, what if a driver wants both a "Green" and "Performant" car to drive? The Toyota Prius is a popular and highly fuel efficient car, but its "performance" (0-60 time, etc) is pretty weak. On the other hand a typical SUV can haul a boat, but gets poor gas mileage.

This initial Sustainable Performance Ranking Metric was defined by Joey Shepp, a sustainability consultant in the SF Bay Area, along with a small flock of GreenMBA students at the Dominican University of California. The goal was to develop a simple automobile ranking system demonstrating which vehicles balance both sustainability and performance.

The "green appeal" of electric or hybrid cars is all well and good, but is that the entirety of the purchasing decision? What about whether a vehicle is fun to drive (or ride)? Electric vehicles can be a lot of fun to drive, but there is a large stereotype against them, that they can only be slow boring ugly golf carts. While the Tesla Roadster and Tesla Model S do a lot to blow up that stereotype, one can then dismiss them as being too expensive for the average person, and get back to the slow boring ugly golf carts idea. That still turns out to be untrue, because the Nissan Leaf and Chevy Volt both have decent (but not stellar) performance. How can we measure these attributes in a way that makes sense to the consumer? Further, if consumers start demanding cars based on a sustainable performance metric, the automakers should respond.

The metric as it stands is regarded by the project organizers as "Beta" and looks only at static measurements like fuel efficiency, torque, horsepower, and power/weight ratio. It clearly leaves out dynamic measures such as handling or 0-60 times.

The surprise in this list may be the Mustang, but the V6 version has a high fuel efficiency if you can keep from being a lead foot.

The pattern in the numbers for these two groups is that the hybrids tend to have a higher sustainability metric (fuel efficiency and emissions) but a poor performance metric (torque, horsepower, power/weight). The gasoline or diesel cars are the other way around.

One observation is the benefit of hybridization shows more strongly in this class of vehicle. It may be, as some think, that the biggest bang for the buck in improving fuel efficiency and other sustainability metrics is not to be found in the small cars but in the large ones.

A couple examples are the 2013 Range Rover that will be sold with an optional turbocharged Diesel hybrid drive train that should deliver a 37 miles/gallon EPA fuel efficiency. Another example is the 2013 Mitsubishi Outlander PHEV (plug-in hybrid) SUV offering a 61 km/liter fuel efficiency.

But the "hybrid price premium" means that among the affordable SUV's and Trucks (under $30k), none were hybrid or plugin hybrid.

In this segment the Chevy Volt came out on top, over the Prius, because while its hybrid mode is not as good as the Prius, it has much better performance. This shows in the Volt fan base who adore their cars. The survey did not rank any electric cars, and only ranked the Volt in its hybrid mode.

Another interesting point is the presence of TDI Diesel's, because they not only have a wonderful low emissions footprint, they are highly fuel efficient.

While the team did not rank electric cars, they did produce one chart for the Hatchbacks group that adds some of the electric cars. In these results, the first three positions are: #1 Tesla Model S, #2 Chevy Volt (electric mode), #3 Nissan Leaf.

The Tesla Model S is the epitome of the balance of sustainability and performance. For example at the 2012 REFUEL race a couple months ago, four Tesla Model S's finished faster than the fastest of the Tesla Roadsters in that time trial. That's quite a feat for a luxury sedan to beat such an iconic car as the Tesla Roadster, and obviously the Model S ranked well in both sustainability and performance.

While the Nissan Leaf ranked with better sustainability numbers than the Chevy Volt, the Leaf lost to the Volt in performance.

The Sustainable Performance Metric is only at the beginning of development, with the team hoping to make improvements in the future. One example is to bring in more dynamic performance metrics and a more comprehensive sustainability measure. One surprise is how well the straight gasoline or diesel vehicles perform, except that the automakers have been making great fuel efficiency gains even without hybridization or electrification. If one doubts that electric or hybrid vehicles can ever compete with gasoline or diesel, consider a couple counter-examples. First is the recent e-Power/TTX electric motorcycle race at Laguna Seca in which the top five electric motorcycles had lap times within the brackets of the AMA 600cc superbikes racing that same weekend. Second, at the recent Pikes Peak Hill Climb three of the top 10 cars were electric.

Tesla Contemplates A New Strategy for China Retail even As Sales Boom
Jay Leno on Elon Musk & EVs: “I Think He Should Get ... Credit"
END_OF_DOCUMENT_TOKEN_TO_BE_REPLACED