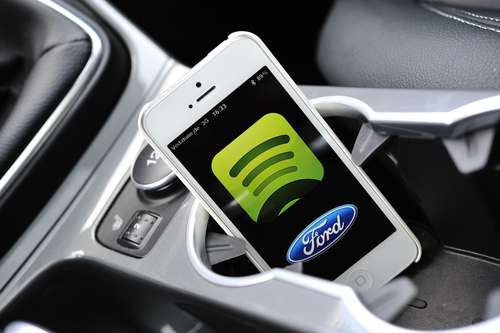 Ford is bringing the Spotify music streaming service to cars equipped with SYNC AppLink for simple hands-free, voice-activated entertainment while driving. The updated Spotify application will be available in the Apple App store shortly.

Spotify is a leading on-demand music streaming service providing access to a catalog of more than 20 million songs. The integration of Spotify with SYNC AppLink is an example of the SYNC AppLink developer program announced by Ford in January. That program provides API's for smart phone applications to integrate with voice control features built into Ford cars.

With AppLink, drivers of AppLink-enabled Ford cars will be able to to enjoy Spotify songs and playlists while keeping their hands on the steering wheel and their eyes focused on the road. More than 1 million Ford cars are now equipped with SYNC AppLink.

When drivers with a Spotify Premium subscription have the app running on their SYNC-connected iPhone, they will have access to a wide array of functionality using voice commands such as: Now playing (the car will speak details of what’s playing); Star/unstar track; Add track to your “Road Trip” playlist; Choose playlist (the car will ask which playlist to play); Play starred (the starred playlist will play); Play music (the car will start playing your library); Similar music (the car will present more albums by the current artist); Recently played (the car will allow you to choose from the 10 most recently played artists, albums or playlists); Start album/artist/track radio; Shuffle on/off; Repeat on/off

Drivers can also use the audio controls to: Skip track forward/back; Play/pause; Program the preset number keys so they work like a radio and save the currently playing album, artist or playlist to that number for easy access

Even Spotify's social network sharing features work while on the road, allowing friends to send albums, tracks or artists to your Spotify inbox, and the car will read it aloud; for example, “You have been sent a new playlist. Would you like to play it?” If the driver answers "yes" Spotify will start playback through the car's sound system.

Spotify is also confirmed as the first music service provider for the upcoming launch of SYNC AppLink in Europe.

“Spotify brings you the right music for every moment: on your computer, your mobile phone, your tablet, your home entertainment system and soon also in your Ford vehicle,” said Pascal de Mul, global head of hardware partnerships, Spotify. “Our collaboration with Ford SYNC AppLink will enable music-loving drivers to enjoy access to Spotify’s huge catalog of more than 20 million tracks while on the road.”