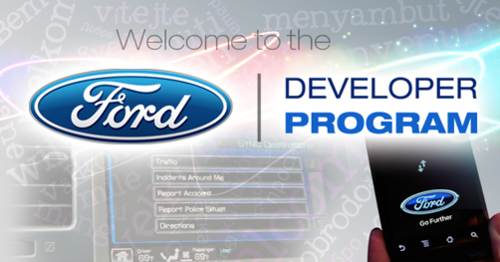 Smart phones are the next big wave in technology, and Ford is opening the door to integrating smart phone apps with automobiles with a new SYNC AppLink developer program.
Advertisement

This week is the Consumer Electronics Show in Las Vegas, next week is the North American International Auto Show in Detroit, so where are the automakers? This week they're in Vegas, because cars are becoming mobile consumer electronics devices, and next week they'll be in Detroit, because cars are still cars. On Tuesday, both Ford and GM announced software developer programs with API's allowing application developers to develop apps for their respective cars.

The Ford program works through the SYNC and AppLink features of Ford cars. SYNC provides a communication protocol (connectivity) and voice control between a bluetooth cellphone and a Ford automobile, while AppLink provides voice commands allowing drivers to control smartphone apps without the need to pick up their devices. The developer program opens these features to a broader range of developers, who can apply via the developer.ford.com website.

“When we first introduced SYNC in 2007, there was a need for an appropriate way to connect and control cellphones and digital music players in the car due to the massive consumer adoption trend,” continued Thai-Tang. “Offering voice control so drivers can keep their hands on the wheel and eyes on the road has proven to be popular with our customers. Now, with an even faster adoption rate of smartphones, there is a need for a renewed focus on voice control for the unique capabilities of these devices, especially for the use of apps.”

In other words, Ford believes "hands on the wheel and eyes on the road" is important for safety as technology evolves to bring mobile computing device and smart phone wizardry into our lives.

Ford says the smart phone market is growing rapidly, with more than half of Americans using smart phones of some kind that can run apps of some kind. Globally there are a billion smart phones currently, expected to grow to 2 billion by 2015.

“The car presents an all-new opportunity for developers, especially the millennial market, and we’re looking forward to seeing what results,” said Thai-Tang. “Engaging innovators outside of the company is a key part of our strategy to be consumer-driven in all aspects of our business, helping us not only satisfy what’s going on today, but setting us up for innovative solutions to the challenges coming in the future.”

Developers desiring to enable AppLink support for their smart phone apps must register at developer.ford.com and download the AppLink SDK. The SDK contains code libraries and documentation for APIs enabling two-way communication between mobile apps and the vehicle including voice commands from the driver. Once a developer implements AppLink in their app, it is submitted to Ford for evaluation and approval. Once approved Ford will provide a distribution license, after which the app is submitted to the relevant app marketplace.

The program will be launched in Europe and Asia later this year. In the meantime Ford has announced a collaboration with Sina to enable the Weibo mobile app to use AppLink in Ford vehicles, providing news, weather, microblogging and location-based services. Sina is a mobile media company serving China and Chinese expatriates around the world. “Our Developer Program is open and available to anyone around the world,” said John Ellis, global technologist for Ford Connected Services. “A key advantage of our approach is the ability to quickly have relevant apps and services to support the launch of AppLink in Europe and Asia, by making it easy for local developers to tell us what the most popular and important apps are to suit the buyers in that region.”

The SYNC AppLink developer API program is unrelated to the OpenXC developer API program that Ford announced a year ago. Where SYNC AppLink focuses on voice control of smart phone apps, the OpenXC program focuses on retrieving data from the CANBUS through the OBD-II connector. These are targeted at different goals, problems, and offer different services. On their website, Ford describes the OpenXC program as a "non-production open source interface, designed to attract top developers to experiment with DIY projects in Ford vehicles." The SYNC AppLink program is targeted at production use, by commercial partners who are selling commercial-grade smart phone applications.

Nicolas Zart wrote on January 8, 2013 - 9:39pm Permalink
It makes sense, Ford has been using Windows with MyTouch for some time. According to them, it was the only platform available at the time. I highlighted the MyEnergi Lifestyle app and system that pushes plug-in vehicles and home smart appliances today to better manage home energy, smart phones are becoming again the central point. Remember how US Robotic thought the PalmPilot wasn't the most important thing but the cradle was since it was suppose to hook everything together? More than a decade we're there, except everything is wireless. It's amazing how far things have come in less than 20 years. Just one clarification though, is Ford and GM working together on making their platform open, i.e. actually working together with inter-operabillity?
David Herron wrote on January 9, 2013 - 1:10pm Permalink
No.. Ford and GM have completely different approaches. Ford is integrating smart phones via bluetooth. GM is allowing apps to run in the infotainment system.
Nicolas Zart wrote on January 9, 2013 - 1:55pm Permalink
That's interesting. I think running trough a smart [phone or connected device makes more sense in the future for users, but the GM way is probably easier for manufacturers. Different philosophies. We'll see what makes more sense in the future.