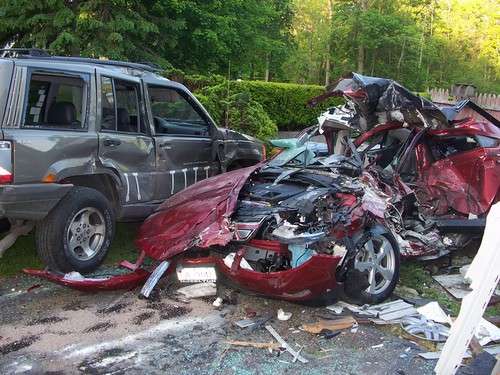 A horrible accident last week in Geneseo NY destroyed a Chevy Volt. Because that Volt did not burst into flames, the event calls into question the whole politicized drama of recent months in which right wing Republican politicians tried to label the Volt as an incendiary fire risk. If the Volt is so incendiary, then where's the fire?

According to a report in the Livingston County News, the crash occurred on May 23, and involved a motorist, driving a Toyota Camry, who failed to stop at an intersection. Instead the Camry went through the intersection, hopped over a ditch, plowed across a lawn, struck two cars sitting side-by-side in a driveway, pushing the cars back 25 feet, and causing damage to the house. The car taking the brunt of the damage, a brand new Chevy Volt, was destroyed beyond recognition, in part because the Camry landed on top of the Volt. The 1998 Grand Cherokee Jeep sitting next to the Volt was also damaged enough to be declared a total loss. The collision caused a fire in the Camry's engine, quickly put out by neighbors, and sent the Camry's driver to the hospital with severe injuries.

In short this was an extremely severe accident, with the picture (provided by the Geneseo Police Department) telling the story in a way words cannot.

To give context let us review the, uh, firestorm concerning the supposed fire risk of the Chevy Volt. On May 12, 2011, a crash test under the NCAP program was conducted by a NHTSA contractor in Wisconsin. While the Volt earned a 5-star crashworthiness rating, the car crashed on the 12th caught fire during the weekend of June 4-6, 2011, 3 weeks later. All through the summer engineers from the DOT, NHTSA, EPA, GM, NASA and other organizations did a forensic and failure analysis of that fire, and eventually in November 2011 the fire was revealed to the public and shortly afterward the NHTSA launched a formal investigation.

Almost immediately right wingers began pounding on the Volt calling it an incendiary fire risk, linking the supposedly risky Volt to a narrative about Pres. Obama's supposedly failed green jobs strategy. While the political drama over the Volt fizzled shortly after the NHTSA report on the Volt fire, and January's testimony before Rep. Issa's House Committee on Oversight and Government Reform, last weeks crash involving a Chevy Volt gives us an opportunity to revisit that mess.

That political drama would have validity if there were actual fires of Chevy Volt's in the real world conditions. But there have been no Volt fires, despite a few crashes involving Volt's. Last week's crash shows a Volt subjected to a more severe crash than last years crash test. Yet, the only vehicle catching fire was the Camry, not the Volt. In the meantime gasoline car fires occur at the rate of 250,000 per year, sometimes resulting in fatalities, as almost happened in this case.

The only other fires involving Chevy Volts were three garage fires last year. In each case a Volt happened to be parked in a garage that caught fire, and in each case fire investigators cleared each of the Volt's from having caused the garage fire.

In the Geneseo incident, the system worked as GM said it would. According to the Geneseo Police Chief, the Volt owner reported that GM engineers showed up within two days, dispatched from Detroit, and depowered the battery pack, just as GM said is the appropriate response. GM also took possession of the Volt, presumably to study it further. Having carefully reviewed the NHTSA report into the crash test fire, it's clear GM and the NHTSA want to understand how to best protect the battery pack from damage, and a Volt subjected to this severe of a crash would give engineers a treasure trove of damage data to study.

In the mean time there is no indication this Volt will catch fire, despite the damage it suffered.

The last item to ponder is the political firestorm during which the Chevy Volt was treated as a punching bag. On reflection, is there any validity to that political firestorm? No. The current political climate is going through waves of vilification, tarring chosen targets with sometimes unwarranted untrue false allegations. Is this really the healthiest way to conduct politics? To sling falsehoods around in an attempt to tarnish opponents? Is this how we really want our society to be governed?