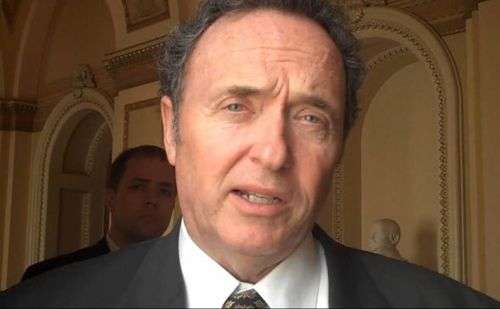 The laudable goal, developing a gasoline powered car with 100 miles/gallon fuel efficiency, is being offered a $1 billion government prize as incentive, and would keep the U.S. addicted to oil.
Advertisement

Not all Californians are looking forward to electric vehicles, some are Congressmen who propose legislation whose result would be to keep us addicted to oil. Yesterday Rep. Dan Lungren (R-CA) proposed HR 3872, the E Prize Act of 2012, which offers a $1 billion prize to the first automaker who manufactures and sells a "mid-sized sedan" ("car") getting over 100 miles/gallon.

However let's consider this bill from some other angles.

Suppose the bill passes (it's currently in Committee) and signed by President Obama and the automakers start falling all over themselves to develop a car that would win the prize, what would be the result? A lot of research & development going into a vehicle that runs on gasoline. It doesn't matter how fuel efficient that vehicle is, it would still run on gasoline. What's the purpose in throwing a carrot to the auto industry so they'll continue building cars that run on gasoline?

One answer to that question is Rep. Lungren's voting record. He's voted for opening the Outer Continental Shelf to oil drilling, voted against recognizing greenhouse gasses of any kind, voted against tax credits for renewable electricity, voted against tax credits for energy conservation, voted against tax credits for biofuels, voted against criminalizing oil cartels like OPEC, and on and on. He was awarded a 0% rating by the Campaign for America's Future for his opposition of energy independence. A few years ago in a town hall meeting, when asked about the campaign contributions he receives from "Big Oil" Lungren answered "If I could get more, I'd take more." Clearly he, as a Congressman, is a Friend of the Oil Industry, just like his colleague Rep. Mike Kelly who earns hundreds of thousands of dollars a year in dividends from his oil company stock, and proposed a law that would end the $7,500 tax credit for electric vehicles.

Over on Congressman Lungren's website this proposal (HR 3872) is explained in the context of another bill, New Options Petroleum Energy Conservation Act, or NOPEC. NOPEC would "reduce our dependence on foreign oil by providing incentives for greater fuel efficiency in addition to alternate energy sources," and a key element of NOPEC would be the $1 billion prize proposed in HR 3872. The NOPEC bill is not currently being considered by Congress (according to thomas.loc.gov it was last considered in 2009), but it includes provisions to support development of "carbon neutral combustion facilities," extend tax credits for solar energy producing properties, the aforementioned $1 billion prize for fuel efficient cars, procures $30 billion in research dollars for lithium ion battery technology, and more. That bill died in committee, but the E Prize plucks out one provision, this $1 billion prize, to stand on its own.

Lungren's website provides the answer to the rhetorical question posed earlier, isn't this just a government handout? He explains that "Competition is far more likely to achieve desirable societal objectives than a government program aimed at picking winners." Prizes, he says, "only imposes a governmental fiscal obligation if the objective for which it was created is achieved." Maybe so, but just how would it be a desirable societal objective to continue burning gasoline?

The goal of fuel efficiency is laudable, but is this a good idea? It would spend government money on a goal that doesn't change the dependency on fossil oil. If the U.S. car fleet had such high fuel efficiency it would surely decrease the dependency on fossil oil, but we would still be dependent on the stuff. If there were to be a government incentive (prize) for developing a new kind of car, shouldn't it be one powered by the energy of the future, rather than one powered by the energy of the past? Maybe a Congressman, like Lungren, who's well known for protecting the Oil Industry, sees the world differently than the rest of us?

JeffU wrote on February 2, 2012 - 7:02pm Permalink
Chevy Volt already wins! I get 533 MPG now.
David Herron wrote on February 2, 2012 - 7:19pm Permalink
Problem is his proposed law doesn't really make it clear what kind of vehicle would qualify. It says "mid-sized sedan automobiles which operate on gasoline and can travel 100 miles per gallon." Does that include a plug-in hybrid like the Volt? Not clear. Or if it would include the Volt, would it include the Volt only when driven in gasoline mode?
JeffU wrote on February 3, 2012 - 12:46pm Permalink
This just how ignorant and technically out of touch these kind of politicians are. If a car uses gas, the Volt, and not much, it wins. How could you disqualify a car because it uses a technology that improves gas mileage? Where would you draw the line. A HFC car can use gasoline to make hydrogen. This bill of course will get no traction. No phun intended. No other supports it. I'm not sure of the point of this big waste of Congressional time. Clowns to the right . . . Jeff
Anonymous wrote on February 3, 2012 - 12:31pm Permalink
it might have to run stictly on gasoline, not a hybrid or gasoline electric.
JeffU wrote on February 3, 2012 - 1:23pm Permalink
Yes but why? If the point is to get a car that uses less gas than an electric car with a range extender wins. And that car is already made. This is just PR and everybody knows it. And stupid PR it is.
Frank Sherosky wrote on February 3, 2012 - 1:18pm Permalink
I like the challenge. The only pure ICE technology that has a chance is the split-cycle engine with air hybrid, in my opinion. Already, Scuderi Engine has shown tests in the area of 65 mpg. Tour Engine is another offering. I take issue, though, with that slip-in comment in the teaser that it will keep us addicted to oil, as if that's a forever condition, which it is not. And speaking of addiction, why are we using lithium and not zinc? Electrification is growing, but even the government admits that by 2030 at least 80% of cars will still be ICE. Oh how awful, though; as if green cars do not plug-in to the same grid which uses oil and coal. So, give me a break! In this case, the reduction would be so much greater as in fuel sipping that it would surely lessen our need for foreign oil; and we all know that's a major hurdle. Furthermore, the technology would be used for nat-gas as well, which we definitely have plenty of; and would buy us time until we get off the green addiction to expensive and dangerous lithium. Finally, it would energize a cost basis that ALL would avail, not just the affluent who can afford BMW 3s but choose to buy Volts on our tax subsidies, which the masses cannot afford to access. Just remember the automakers cannot make a decent profit on lithium-based EVs. They are too expensive for the masses; and it's the masses that affect less pollution, not the few who can afford Volts and Leafs. So, I find any ICE tech that empowers the masses to afford a more efficient step in the transportation goals has my vote. And if you want green to grow, then support zinc-air batteries which the masses will be able to afford.
David Herron wrote on February 3, 2012 - 4:26pm Permalink
Lithium is being used because it is the lightest metal ... unfortunately lithium metal is highly reactive and pure lithium metal batteries are very touchy. They bind the lithium as an ion in a compound to make it safer, hence the name lithium ion.
Jill Sorensen wrote on February 4, 2012 - 9:33am Permalink
It seems to me that this idea has already been addressed by the market. I drive a Chevy Volt which averages, for me, 146 miles to the gallon because its on-board gas-powered generated recharges the 40 mile/charge battery. So GM gets the prize and beats the 100 mpg target easily. Jill Sorensen Baltimore-Washington Electric Vehicle Initiative (BEVI)