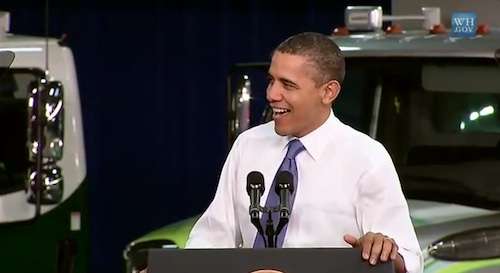 President Obama visited Daimler Trucks North America manufacturing plant in Mt. Holly, NC, to discuss his Administration's all-of-the-above approach on energy policy, and to announce changes to the initiatives supporting adoption of advanced clean technology vehicles, such as the plug-in vehicle tax credit. The setting, a truck manufacturing plant, reflects one of the policy initiatives meant to incentivize further adoption of natural gas powered trucks with tax credits for natural gas and electric big trucks, as well as liquified natural gas corridors meant for long-haul trucks. The policies reflect the Obama Administration stance on energy policy and national energy security, through moving strongly towards alternatives to fossil oil on the one hand, while on the other hand supporting expanded production of fossil oil.

This announcement comes in a context of rising oil and gasoline prices, as well as criticism over the higher prices. In part, no President has much power to control, in the short term, the price of gasoline because short term prices are set by the free market. Where a President can influence gasoline prices is with policies, such as the ones President Obama announced today. Let's first look at the policy changes announced today.

National Community Deployment Challenge: This is a new $1 Billion program meant to assist 10-15 cities across the U.S. to invest in infrastructure, removing regulatory barriers, and create local incentives for deployment of advanced clean technology vehicles. The policy initiative is similar to legislation introduced by Senators Merkeley (D-OR) and Alexander (R-TN) last may, the “Promoting Electric Vehicles Act,” in which the deployment communities would serve as models or "real-world laboratories". Obama's version of the policy is "fuel-neutral," allowing individual communities to choose between natural gas, electrification or even other alternative fuels.

One of the goals is to create five regional Liquefied Natural Gas (LNG) corridors enabling natural gas powered trucks to drive from coast-coast without burning oil, but more on that in a minute.

Making advanced vehicles more affordable: Perhaps this is in response to a critique of current electric vehicle incentives, that the current crop of electric cars are priced so only those with above-average wealth can afford them. In any case, there are four aspects to this change in policies.

First, is to expand eligibility for the tax credit to a broader range of vehicles. The fact sheet distributed by the Obama Administration doesn't explain this precisely, it likely means allowing natural gas vehicles to qualify. Currently the tax credit is for plug-in hybrids or electric vehicles.

Second, is to increase the maximum tax credit from $7,500 to $10,000, to change implementation of the tax credit allowing the vehicle purchaser benefit immediately rather than waiting until next April, and finally to remove the cap on the total number of vehicles for which the tax credit is awarded.

Accelerating deployment of alternative-fuel trucks: Long-haul trucks are only four percent of the vehicles on the road, but collectively represent almost 20% of the fuel consumption in the U.S. This is over 30 billion gallons of fuel per year. President Obama is proposing a new tax incentive to provide a credit for 50% of the incremental cost of a dedicated alternative-fuel truck. The credit has a proposed lifetime of five years, and includes trucks powered by natural gas or electricity. This is meant to be paired with the Energy Department’s National Clean Fleets Partnership, which provides technical assistance to fleet buyers in transitioning their fleets to vehicles that rely on little or no oil.

EV Everywhere: This new challenge, part of the Department of Energy Clean Energy Grand Challenges, is meant to bring together the best and brightest scientists, engineers, and businesses in solving the biggest challenges of our time. The EV Everywhere program is meant to enable companies to manufacture lower cost electric vehicles, with improved driving range, improved fast charging capability, and result in lowering the cost of electric vehicles placing them within reach of families of more modest means. Obama's FY2013 budget includes $650 million to support, through the Energy Department, advanced battery and vehicle technology developments, including the EV Everywhere challenge. EV Everywhere will invest in breakthrough R&D for advanced batteries, electric drivetrain technologies, lightweight vehicle structures, and fast charging technology.

This challenge seems tailored for technology such as the less expensive, higher energy density, battery technology being developed by Envia Systems.

The focus of these initiatives is to reduce demand for Oil, and to switch the vehicle fleet to use other fuels than oil. In part this echo's what President Bush said in 2006, "America is addicted to oil," as he, too, launched into a list of policy proposals meant to reduce dependence on oil. The Presidents speech at Daimler's plant made very little mention of concerns like the environmental or global warming impact of burning fossil fuels. Instead it was entirely focused on reducing dependence on oil, a topic many politicians are again talking about in the wake of rising oil prices.

Noting that the U.S. has 2 percent of the world's oil reserves but uses 20 percent of the world's oil, even though oil production in the U.S. is rising, "we're not going to be able to just drill our way out of the problem of high gas prices." Referring to the politicians who say they can deliver $2/gallon gasoline, "Anybody who tells you otherwise either doesn’t know what they’re talking about or they aren’t telling you the truth." While there is a rebirth of oil and natural gas production in the U.S., the boom is dependent on technologies like the controversial hydraulic fracturing process, and because the U.S. has such small oil reserves is not a recipe for a long term fix. The path being taken is to burn through the little remaining oil, and if no effort is made to wean America from oil, the U.S. will be even more dependent on foreign oil than ever. Further, recent research has shown that natural gas coming from hydraulic fracturing increases bad climate change consequences.

As Obama stated it today, "If we are going to control our energy future, then we’ve got to have an all-of-the-above strategy. We’ve got to develop every source of American energy -- not just oil and gas, but wind power and solar power, nuclear power, biofuels. We need to invest in the technology that will help us use less oil in our cars and our trucks, in our buildings, in our factories. That’s the only solution to the challenge. Because as we start using less, that lowers the demand, prices come down."

Oil prices are set by the world oil markets, and between continued Middle East instability and industrialization in third world countries like China, Brazil, and India, demand for oil on the world markets is rising. President Obama suggests this means for us that "we can't just keep on relying on the old ways of doing business", nor "rely on fossil fuels from the last century", but instead "We've got to continually develop new sources of energy."

Frank Sherosky wrote on March 7, 2012 - 11:20pm Permalink
"Further, recent research has shown that natural gas coming from hydraulic fracturing increases bad climate change consequences." I'm sorry, but in no way can I abide by that statement. The proof is feeble and more politically motivated than sensible. Climate change affected by fracking? Come on! One burst from any volcano surpasses that; and 4/5 of the earth is oceans, leaving a lot of area to gas out from the belching depths.
Aaron Turpen wrote on March 8, 2012 - 9:59pm Permalink
Of course, what Obama says is not often what he actually does, so we'll see how far this "initiative" actually gets. And no, I'm not a Republican.