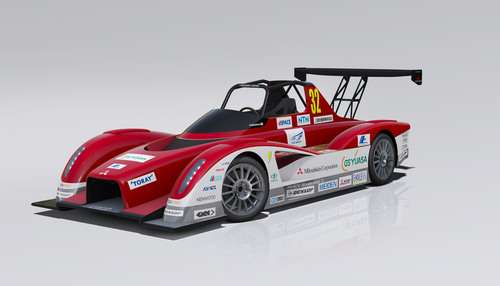 The 2013 Pikes Peak Hill Climb, which already had several high profile electric car and motorcycle entries, has two more with an entry by Mitsubishi of two electric race cars.
Advertisement

The electric racing feast at the 2013 Pikes Peak International Hill Climb was taken to a whole new level with the entry of two electric cars from Mitsubishi. The two cars in the June 30 race are all-new MiEV Evolution II all-electric four-wheel drive (4WD) prototype racecars.

Like other electric entrants in the 2013 PPIHC, the Mitsubishi team is looking for an outright win. The Pikes Peak race is a yearly time trial race to the 14,110 foot summit of Pikes Peak near Colorado Springs. Racers climb about 4700 feet total altitude gain, and for the gasoline powered race vehicles part of the challenge is the thinning atmosphere affecting combustion. Electric vehicles have an advantage because they do not require combustion, and operate equally well in any atmospheric condition.

The MiEV Evolution II has an innovative four-motor (two-front/two-rear) drivetrain, and for the 2013 model they've added a high-tech Super All-Wheel Control (S-AWC) all-wheel drive system for superior handling. Electric four wheel drive trains give the option to precisely control torque at each wheel in a way that mechanical systems cannot, allowing engineers to design an optimum handling system.

Mitsubishi will face competition from two other similarly powered entries. One, the 2013 Toyota EV P002, has a two motor drive train that also has 400 kilowatts total power, but a 42 kilowatt-hour battery pack. Their 2012 entry won in the electric division. The other entry is new to the Pikes Peak race, hails from Latvia, and also has a 400 kilowatt drive train.

"We are able to tackle Pikes Peak a second time thanks to the support of our many partner companies. We were able to come up with a new and improved MiEV Evolution II based on the precious data and know-how we gained from last year's race. We welcome Greg Tracy as our teammate. With his wealth of motorsport experience, we will give it our all for a one-two finish. Thank you for your continued support!," says Masuoka.

"I'm excited to compete here with the MiEV Evolution II. I will do my best, along with my teammates, to make an electric vehicle the champ for the first time ever," says Tracy.

Both Toyota and the Latvian entries also have their eyes on an overall win.