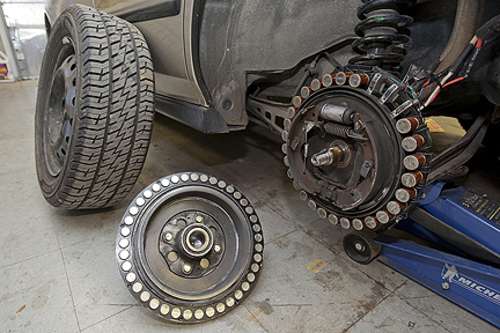 An affordable DIY plug-in hybrid conversion kit, developed by a team at Middle Tennessee State Univ, that is installable on nearly any car, could increase the number of electrified vehicles on the road, and could allows anyone to electrify the car of their choosing.
Advertisement

Are you handy with tools and are anxious to have a plug-in hybrid electric car NOW rather than wait for the car makers to build the plug-in hybrid vehicle of your dreams? A team of students at Middle Tennessee State University have developed an inexpensive plug-in hybrid retrofit kit for any car. The kit, which has a projected $3,000 price, has been demonstrated to improve fuel economy by 50 to 100 percent.

MTSU's Dr. Charles Perry, who holds the Russell Chair of Manufacturing Excellence, oversaw a team of students who jointly developed the kit as part of a research project. The team involved the work of nine students over the last five years, some of whom have since graduated from MTSU. “The whole point was to demonstrate the feasibility of adding the electrical motor to the rear wheel of the car without changing the brakes, bearings, suspension — anything mechanical,” Perry said.

The kit installs in place of the rear wheels on the car. One half of the motor attaches behind the brake housing, while the other half fits inside the wheel. A battery pack is installed somewhere like the trunk, and a pair of controllers drive these motors. The electric motors supplement power from the gas engine while driving the car. The technique does not interrupt the drive shaft, and does not replace the existing wheel. It is also transparent "performance-wise". The team took the usually empty space around the "rear wheel brake structure" and packaged in a brushless DC motor. The "stator magnets" are packaged around the brake rotor, these are electromagnets and are turned on-and-off rapidly by the controller as the wheel rotates. There are an array of 45 permanent magnets mounted on the "rotor" which is mounted inside the wheel. The motors create up to 200 ft-lb of torque, and there are two mounted on the test car each with their own controller.

The kit is designed to go after the market of the typical daily driving pattern, which is that most cars are driven 40 miles or less per day, at 45 miles/hr or less. While the team did not give precise specifications, the video implies that the motor system drives the car at speeds up to 40 miles/hr and then cuts off above that speed.

The team used a 1994 Honda station wagon as the test-bed for developing the kit. The battery pack and controller components chosen are typical for the electric vehicle conversion market. The batteries shown in the video have the distinctive blue color of lithium-iron-phosphate cells from CALB Energy, a Chinese battery maker. Likewise, the controllers have the distinctive shape and color of those from Kelly Controllers, a Chinese electric motor controller manufacturer.

The battery pack is rated for 80 volts and "100 amps" but Dr. Perry may have meant to say "100 amp-hours". The battery pack uses the "Mini-BMS" battery management system. All these parts are ones anybody could buy from the vendors selling parts for electric vehicle conversions. The real innovation is in how the motor is integrated into car wheels.

“The wheel-hub motor is an answer to a problem. It’s innovative technology. You can take and bolt it on a car. When people see that, their eyes light up. They think it might cost a lot of money and are surprised when you tell them it might be $3,000. We have a lot of student projects that I have been a part of, but the wheel-hub was my favorite out of the whole thing,” said Brent Brubaker, one of the students involved in the project.

Conversion kits of this sort allows someone to electrify the car of their choosing, rather than the cars chosen by the automakers. Doing an electric vehicle conversion takes a lot of work (voice of experience) but can be worth it if you have a hankering for an electric version of a specific car.

The technology is at the stage known as the “the valley of death,” because they are working on transferring the technology from laboratory to a start-up company. “We have gained proof of concept in terms of feasibility,” Dr. Perry said. “We need quite a bit of money to have proof of product. What we’ve achieved is a demonstrated technology, not a proven technology. Investors want to see proven field-tested performance and reliability. We have to pass through this transition, from feasibility to true, viable product.” The team has found a manufacturing partner, and is currently seeking investors.

larry smith wrote on July 27, 2012 - 11:16pm Permalink
i have disc brakes with abs how would this work? do the motors work by the amount of pedal your giving your motor? love to have more info about how long the battery suppose to last.
Kevin Slater wrote on November 19, 2012 - 8:29am Permalink
Is this only targeted at front drive cars with rear drum brakes? What about regenerative braking?
k jacobs wrote on March 30, 2015 - 10:03pm Permalink
brilliant,, Q. will this unit assist in braking by creating a generator and return energy back to the batteries? kj
david aprile wrote on July 27, 2019 - 9:39pm Permalink
can you buy the motor units yet for ford pickups?
Dave wrote on March 26, 2021 - 10:31pm Permalink
This looks like what could be used for pickup truck driven for local and commuting.