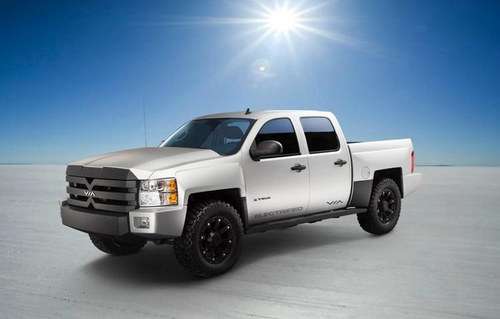 Maximum Bob Lutz, a backer of Via Motors, unveiled an improved line of plug-in hybrid electric trucks that can lower a company's fuel costs, power job sites without requiring a spare generator, repower a neighborhood in emergencies, and drive the company President around town.
Advertisement

On Monday, Bob Lutz, a backer of plug-in hybrid truck manufacturer Via Motors, announced the company's latest electric truck (the XTRUX) saying it had the torque of a monster truck with the fuel efficiency of a Prius. These are big claims to make, but to back him up were fleet managers with PG&E, the largest utility company in America, and Verizon, one of the largest telecommunications companies in America. Both companies have been working with Via Motors on testing the plug-in hybrid trucks designed by Via Motors, and are looking to put these trucks into service for crews fixing utility lines in their service areas.

Via Motors makes a line of plug-in hybrid electric trucks aimed at commercial fleet owners. They have designed a plug-in hybrid drive train that theoretically can be installed in any truck, but the company has a supply arrangement with General Motors where Via's trucks are re-manufactured GM vehicles. For example the VTRUX is based on a Chevy Silverado 1500. See Via Motors teases electric monster truck unveiling at NAIAS next week for earlier coverage

The design supports an electric driving range of 40 miles, a 150 kilowatt generator to recharge the battery pack, and the V-Truck provides up to 120 kilowatts of power output. This is a truck that can not only drive the crew to the job site, but also power the jobsite without having to drag along a separate generator.

The XTRUX, announced by Via on Monday, takes this to a new level. Where the VTRUX motor and controller system is rated for 300 kilowatts (402 horsepower), the XTRUX is rated for over 600 kilowatts (800 horsepower). That's the "torque of a monster truck" part of Bob Lutz's pitch.

As for the "fuel efficiency of a Prius," Lutz claimed the trucks would exceed 100 MPGe fuel efficiency based on a 35-40 mile electric driving range. That, of course, depends on how the truck is used. For example if it is driven 40 miles to a job site, then used all day to power welders and other power tools, the engine will have been running most of the day as a generator and not to drive the truck. How do you calculate the fuel efficiency in such a scenario?

Via Motors unveiled two other vehicles on Monday. One, the Presidential SUV, is based on an Escalade, and is a luxury plug-in hybrid SUV. The second is a plug-in hybrid electric cargo van. Both use the 400 horsepower version of the Via Motors drive train.

Greg Pruett, Senior Vice President, Corporate Affairs PG&E Corporation, asked us to think of what the emergency response to Hurricane Sandy would have been like if the utility trucks could directly repower the grid. Via's truckshave a significantly powerful power export capability, that can power a job site full of power tools. PG&E has a most interesting goal to use the power export capability to directly repower the grid both during routine grid maintenance, and during emergency response. It is planned for the VTRUX and XTRUX to provide over 120 kilowatts of power export, which is enough to directly power the power lines connected to a neighborhood-level transformer.

Kenneth Jack, Vice President of Fleet Operations for Verizon Communications, was also on-hand to say Verizon liked the plug-in hybrid cargo van designed by Via Motors. Because of the electric driving range their crews were able to drive almost entirely on electricity, avoiding not only the cost of the fossil fuels, but the greenhouse gas emissions.

Ken Jack, vice president of fleet for Verizon, said: "We believe the challenges businesses face in operating sustainable fleets require an ecosystem of innovation. Our collaboration focused on developing a more environmentally friendly cargo van, as cargo vans are widely used by large U.S. fleets and account for more than 30 percent of Verizon's fleet. Electrifying these work vehicles could have a significant impact on a nationwide reduction in fuel consumption and CO2 emissions."

Carol England wrote on March 13, 2015 - 2:50am Permalink
But how much can the via truck tow? ie a horse trailer etc. and then how much does that take away from the mpg, etc.?