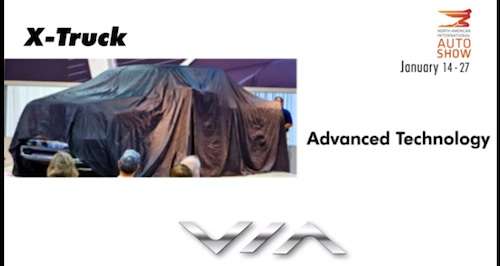 Plug-in hybrid electric truck maker, Via Motors, plans to reveal 3 new vehicles next week, promising the X-Truck will have a stump-pulling 800 horsepower and the torque of a monster truck, but designed for contractors and utility workers to use in the field.
Advertisement

Next week at the North American International Auto Show (NAIAS), Via Motors will be announcing the next models in the company's plug-in hybrid electric truck model line. The company, backed by Bob Lutz (former vice-chairman of GM), makes a line of plug-in hybrid trucks targeted at commercial fleet owners, and built on GM Trucks. On Wednesday, the company posted a teaser video on YouTube showing Bob Lutz previewing the two vehicles they'll show at the NAIAS.

The first vehicle, the X-Truck, was described in the video as promising "the most advanced technology full sized electric truck in the world, with up to 800 horsepower, four wheel drive, and the torque of a monster truck, and yet it has the fuel economy to make the Prius look like a gas guzzler." Namely, 100 mpg. The truck was shown with a tarpaulin draped over it. By the shape of the bulges we expect the X-Truck is based on the Chevy Silverado 2500HD, or possibly 3500HD.

What do we make of the claims? First, the company's existing line (the V-Truck) is based on the Silverado 1500 which can come in a four wheel drive model. Having driven one of Via's V-Truck prototype vehicles in both two-wheel and four-wheel drive mode this writer can attest to the the performance of Via Motors' trucks. In two wheel drive mode it accelerated (around a parking lot) like crazy, and in four wheel drive mode it felt like it had the kind of powerful torque required by a construction worker in the field.

To hit 800 horsepower with an electric drive train requires an electric motor and controller combination capable of 600 kilowatts. Via's drive train design has a gasoline engine driven generator (rated for 150 kilowatts) used solely to recharge the battery pack. Another electric motor is connected to the drive shaft, and has no mechanically connection to the gasoline engine. In the V-Truck, that motor and controller combination is rated for 300 kilowatts (402 horsepower). For the X-Truck it is plausible that a larger truck body gives the room necessary to double-up the motors/controllers and reach a 600 kilowatt system power.

The second vehicle described in the video is an "Escalade-class SUV that drives like a Volt, with four-wheel drive, cargo capacity, and the comfort you expect in a luxury-class SUV, but it can average over a hundred miles/gallon in typical driving." Clearly this SUV is a Cadillac Escalade with Via's plug-in hybrid drive train.

A press release issued by the company on Wednesday promised that Via's staff would unveil "3 Full-Size Electric Cars" at the NAIAS, but the video only describes these two. We won't know what that third vehicle is until next week. The press release also promises that Bob Lutz will be chatting with a live holographic projection of Thomas Edison during their press conference.

Thomas Edison had, over 100 years ago, worked with Henry Ford on electric vehicle designs. Edison was to supply not only nickel-iron batteries, but also a home-installed wind turbine to produce an unlimited amount of power from the wind to power the cars and peoples homes. A second video posted by Via Motors alludes to Edison's plan, so it'll be interesting to learn what they are planning to unveil.

The company's target market so far is construction workers, utility workers, and others who are in the field hauling and building things. Their designs include a "power export" capability that provides both 120 volt and 240 volt power outlets meant for construction workers to power their tools in the field without having to carry a genset. The truck is the genset, and provides enough power to run an arc welder. They're also working with PG&E (Northern California's electricity utility) to use these as "trouble trucks". One scenario is for the truck to repower a neighborhood-level electrical grid, using the on-board genset, while utility crews repair downed lines.