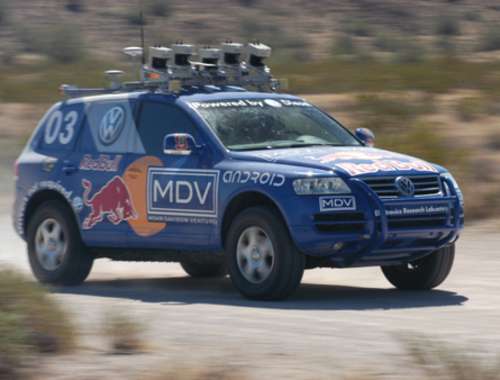 Maybe future electric cars will be charged wirelessly while driving

Stanford University researchers unveiled today theoretical results on a system for wirelessly charging, at up to 97% efficiency, electric cars as they drive down the road.
Advertisement

Researchers at Stanford University today announced promising results of a theoretical study into wirelessly charging electric cars while they're driving down the road. If the system behaves as the theory suggests, this would solve electric vehicle range limitations by keeping the vehicle charged while driving.

The researchers designed a highly efficient system for transferring electricity wirelessly using magnetic resonant coupling. Two copper coils, one in the road and the other in the car, are tuned to resonate at the same frequency. The efficiency of the system depends on the precise configuration of the coils, the resonant frequency, and the distance between the coils.

The goal of the research team is developing an all-electric highway that wirelessly charges electric cars and trucks as they drive down the road. Such a system would be a solution for range limitations of electric cars. The vehicles would be recharged while driving down roads by electricity transmitted from the coil in the road, and received by the coil in the car.

Their research paper, published in Applied Physics Letters, talks about having developed a mechanism for wireless transfer of power over a 2-3 meter distance. The efficiency of their power transfer system depends on the types and orientation of electrodes used, the operating frequency of the magnetic fields, and the distance between the coils. The researchers identified the optimum type and orientation of electrodes, and optimum frequency for efficient energy transfer. With those optimum characteristics the transfer efficiency is above 90% at distances up to 3 meters, and is as high as 97% efficiency at shorter distances.

"What makes this concept exciting is that you could potentially drive for an unlimited amount of time without having to recharge," said APL study co-author Richard Sassoon, the managing director of the Stanford Global Climate and Energy Project (GCEP), which funded the research.

Wireless energy transfer systems have existed for a long time. For example some earlier electric cars, such as the EV1, used an inductive charging connector rather than a wired charging connector. A system is available today from Evatran that enables wireless charging, at a fixed location, using the same J1772 protocol used in wired charging stations.

The Stanford researchers have not implemented the system in an actual vehicle, instead the results they've presented are theoretical. Their next steps are to test the system in a laboratory, and to try it out in real driving conditions.

There are several issues with this research result to consider.

The biggest issue here is the cost of implementing this system. It would mean ripping up most or all roads to install coils underneath to transmit electricity, a very expensive proposition indeed. Where would there be money to pay for it?

Another issue is the potential for effects on drivers, passengers or the on-board electronics that control steering, navigation, air conditioning and other vehicle operations.

The last is more of a question, is such a system needed in the first place? Is it that hard to plug in an electric car to charge the battery pack? What's relative difficulty between plugging in an electric car to charge it up, versus going out of your way to stop at a gasoline station to fill the fuel tank? And what about the battery energy density breakthroughs which are sure to happen in the due course of time. There are plenty of research teams working on better battery chemistries and it's likely that sooner, or later, a new battery technology will be developed which will supplant the lithium-ion batteries currently in use. With today's electric cars recharging the car is simpler than filling a fuel tank if only because you don't have to go out of your way to go to a filling station. The issue with current electric cars is the range, and the speed of recharging the pack. There is enough advanced battery research underway that it is highly likely a higher energy density battery system will be available within a few years, making range limitations less of a worry. And if such advanced batteries could withstand a rapid recharge, a 5 minute fillup with electricity is quite possible.

On the other hand, the Stanford Researchers talk of a wholly different transportation model than we enjoy today. They talk of robotically driven cars, on roads with sensors in them to guide cars along proscribed tracks in the road, and GPS systems help the cars know where they are. Implementing that vision would also mean re-architecting the current system of roads and most especially the dependency on human to avoid crashing their machines into other machines. Humans have proved themselves to be very fallible drivers given the large number of accidents occurring every day. Perhaps automated vehicles could become good enough in a few years to relieve us of the chore of driving, and the notion of rebuilding the roads to support autonomous vehicles would also be a chance to install wireless electric car charging systems. And the money? It could come as a user fee from vehicle passengers driving on the road, collected automatically based on the number of miles they drive.

Bubba Nicholson wrote on February 2, 2012 - 5:23am Permalink
This is the obvious way forward. Power lines will be moved underground eventually, why not into the roadways to also power motor traffic? ICE's will soon increase their efficiency, but electric motors are here now. I expect that technologies will compete until we have a hopeless jumble. Subsidize electric automobiles, and penalize polluters.
JP White wrote on February 2, 2012 - 3:09pm Permalink
One of the biggest problems for modern day EV's is maintaining a decent range while driving on Interstates and other fast highways. Range can be cut in half when traveling at a constant 70mph. The prospect of being able to charge as you go from one city to another is very compelling. I can't see every road being equipped in this way, the cost would be prohibitive; but major thoroughfares could do so as resurfacing and rebuilding project are undertaken. If a 200 mile stretch of an interstate had say 50 miles of charging available a long journey with maybe just one 20 minute stop at a L3 charger becomes feasible and the journey could be done in similar travel times as ICE vehicles. The concept of automated vehicles has been explored by Google, and by all accounts the experiment seems to be going better than most predicted.
Dick Karpinski,... wrote on March 6, 2012 - 4:59am Permalink
"guide cars along proscribed tracks" Surely not. You are NOT supposed to do things that are PROscribed. Perhaps you meant PREscribed. I am so eager to let the car do the driving; not only will that reduce my tension while traveling, but it will vastly increase the safety of the trip and make it much more fun and even restful. This wireless recharging would be easy to install as a revised guard rail if the cars drove themselves. Let these cars own the carpool lane if non-self-driving cars are still on the road. Let them also run entrained to cut air resistance; at bumper to bumper spacing, each lane handles much more traffic. Wouldn't a superconducting coil or even just a graphene coil work better than copper?