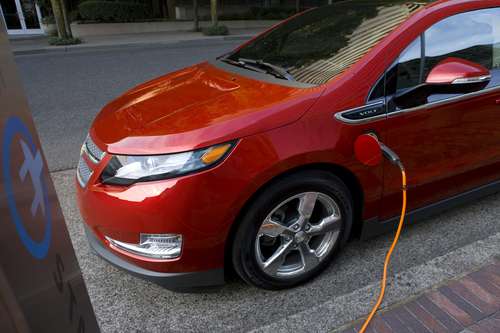 Lowered demand in Chevy Volt due to price, not fires, interest in Nissan Leaf stable

Instead of showing that "federal investigation of three fires that occurred after Volt crash tests lowered demand for the Chevy Volt" a recent report instead shows interest in the Volt has fallen due to its price.
Advertisement

A number of news reports are circulating a claim, credited to CNW Market Research, that "federal investigation of three fires that occurred after Volt crash tests lowered demand for the [Chevy Volt]." This claim seemed counter to the fact that Chevy Volt sales grew significantly even after revelation of the fire condition in that car. While it would seem likely that fire risk in the Chevy Volt would cause lowered demand, we learned that media reports mischaracterized the CNW report, thanks to CNW's Art Spinella we have the actual report they'd sent to their subscribers. The CNW report is an informative critique of the market position of both the Chevy Volt and Nissan Leaf, and interestingly concludes that interest in the Chevy Volt has declined not due to fire risk but due to its cost.

The CNW report shows a dramatic decrease in interest for the Chevy Volt, and a nearly stable interest for the Nissan Leaf, between March 2011 and December 2011. The reasons for that decrease are more complex than the NHTSA investigation causing the lowered interest, because of factors like the Chevy Volt price being out of reach for most consumers. In fact one of the sub-headings in CNW's report is "Fire concerns; Price dominates" leading a section talking about how there is "little doubt that concerns about accidents and fires play a role in these views [of decreased interest]" and that while a third of those interviewed by CNW cited fire concerns as "key reasons for not considering either the Volt or Leaf" that "when push comes to shove, the real issue is price".

CNW's report assessed consumer sentiment of both the Chevy Volt and Nissan Leaf in March and December 2011. The latter date is important because it is after revelation of the Chevy Volt battery fire and subsequent NHTSA investigation.

The data shows consumers generally like the styling of both the Chevy Volt and Nissan Leaf, rating the Volt style higher than the style of the Nissan Leaf. Between March and December 2011 the ranking for style of both vehicles did not change appreciably.

On the Chevy Volt, the "General Consumers" and "New Intenders" were overwhelmingly unlikely to buy the Volt anyway, and this did not change between March and December 2011. In the "1st Adopters" and "EV Enthusiasts" groups there was a dramatic decrease in interest. For example the number of EV Enthusiasts "very unlikely" to buy a Chevy Volt increased from 6.1% in March 2011 to 35.4% in December 2011.

On the Nissan Leaf however the interest remained almost unchanged from March to December. Again the "General Consumers" and "New Intenders" were overwhelmingly unlikely to buy the Leaf. However for the "1st Adopters" and "EV Enthusiasts" interest in the Nissan Leaf remained strong with majorities reporting they're "likely" or "very likely" to buy a Leaf.

Now let's turn to Chevy Volt's price, since CNW's analysis says that is the predominant concern.

On the Nissan Leaf the ranking of price was more positive and also remained steady between March and December 2011. The General Consumers ranked price of the Leaf as 6.2 on the 10 point scale, with both EV Enthusiasts and 1st Adopters ranking the Leaf's price in the neighborhood of 8-9, on the 10 point scale. In all cases the ranking of the Leaf price held steady or decreased only slightly between March and December 2011.

CNW's report goes on to describe a financial difficulty perceived by potential customers. Their interviewees see the Volt and the Leaf as "second cars", meaning that many interviewees thought a gasoline powered vehicle would be required for most driving. Paying a premium price for a limited-use car is understandably attractive only if your needs fit into the usable range of the car. However in the case of the Volt, because its gasoline engine/generator gives extended range, a Volt owner can use it as their primary vehicle, and that potential Volt buyers aren't accurately understanding its capability.

Clearly this negative downturn of interest in the Volt is not good news for prospective future sales of that car. However it is still curious when put side-by-side with the strong growth in Chevy Volt sales in November and December. What will really count is which direction sales take over the coming months, not just for the Volt but the other electrified cars coming on the market. Primarily the cars are coming in priced similarly to the Chevy Volt, and since prospective buyers are shown here to be understandably price sensitive, we have to wonder if the price issue will affect the other electrified cars as well?