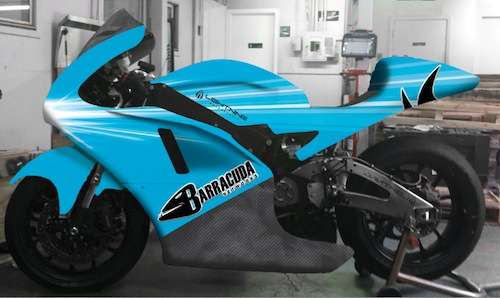 Lightning Motorcycles doubles down on the teams commitment with zero emissions racing with a pair of trailer-mounted solar panel arrays at this weekends e-Power/TTXGP race at Laguna Seca.
Advertisement

This weekend, FIM's e-Power electric motorcycle racing series will be run, for the third time, as part of the MotoGP weekend at Laguna Seca, and for the second year the TTXGP series has been invited to join. While the purpose is to explore zero emission racing technology with electric motorcycles, as a pragmatic matter the e-Power paddock area has been powered by a diesel generator, because of the lack of electrical supply in the Laguna Seca paddock. This year the Lightning Motorcycles team is collaborating with Barracuda Networks to power their race bikes with a pair of trailer mounted solar panel arrays.

Lightning Motorcycles has been at the forefront of electric motorcycle racing since 2009, and several team members, including team founder Richard Hatfield, have raced with electric and biofuel powered machines for over 15 years. The team is dedicated to zero emissions racing with electric vehicles, and Lightning Motorcycles' corporate mission is to develop the most innovative competition race bike and use that technology to produce and distribute affordable two wheel electric vehicles to commuter markets worldwide. What better way to underscore that commitment than with solar panel arrays to recharge the bikes for the races?

The team will bring two bikes to this weekends e-Power/TTXGP race at Laguna Seca. One will be ridden by Michael Barnes, a top AMA Pro racer who has ridden for Lightning Motorcycles since 2010. The other will be ridden by Tom Montano, also a top pro racer who also rode the Mission Motorcycles bike in the 2009 TTXGP on the Isle of Man. Because each Lightning bike carries approximately 14 kilowatt-hours of battery pack, the 55 kilowatt-hours of storage between the two trailers is more than sufficient to power the two bikes.

This demonstrates an issue facing zero emissions racing as electric vehicle racing series grow in number. Most tracks have little in the way of electrical supply in the paddock area, because the paddock is usually little more than a parking lot. Even when a track has paddock sheds for team work areas, the electrical supply in those buildings have little more than 120 volt outlets to run power tools and lights. An electric race vehicle, on the other hand, requires a fast recharge so the vehicle can get back on the track quickly. For the 14 kilowatt-hours or so on an electric race motorcycle, to recharge in under an hour requires a 15-20 kilowatt charging connection.

A few tracks have 240 volt 50 amp circuits distributed around the paddock area, but Laguna Seca is not one of those tracks.

As part of the deal, the Lightning Motorcycles electric superbikes will shed their yellow and black skin and instead wear a distinctive blue "wrap" festooned with the Barracuda Networks logo. Lightning has used a bright yellow color scheme since 2009, earning them a "banana bike" nickname among the TTXGP fans.

In other news for this weekends race, the team from Virginia Tech will return for their second ever appearance at a TTXGP race, and Team Icon Brammo will race with a second rider, Eric Bostrom who will be joining Steve Atlas who is in his second year of riding for Brammo. Steve Atlas was seriously injured during the first round at Sonoma Raceway, and was able to return for the second round at Portland International Raceway.

"We are excited to partner with Lightning Motorcycles on this historic event," said Michael Perone, co-founder and chief marketing officer at Barracuda Networks. "At Barracuda Networks, we thrive on innovative technology, speed and competition, and the MotoGP is the perfect venue to debut our partnership and bike."