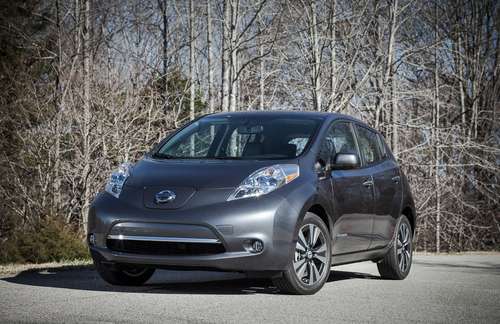 After driving and testing nearly every new vehicle on the market today, KBB's editors have named the top 10 green cars on sale in the U.S.
Advertisement

Kelly Blue Book has named their estimation of the 10 greenest cars on sale in America. In naming this list of cars, on Friday, the Kelly Blue Book team claims "Green Cars really have gone mainstream" and that "several of the best-selling cars in the country are now being offered in hybrid, diesel or even pure electric form." Increasingly car buyers have the ability to choose car with the powertrain they prefer, whether it is turbocharged gasoline, turbocharged diesel, hybrid, plug-in hybrid, or electric.

“A growing number of both eco-conscious drivers are going ‘Green’ when it comes to the new car they choose to drive, and auto manufacturers have primed the pump with the widest array of offerings in the ‘Green Car’ segment than ever before,” said Jack R. Nerad, executive editorial director and executive market analyst for Kelley Blue Book’s KBB.com. “After driving and testing nearly every new vehicle on the market today, our editors compiled a 10 Best Green Cars list that provides a roadmap for consumers looking to get more miles from each gallon of gasoline or to eliminate gasoline altogether.”

2013 Nissan Leaf: This all electric car is at the leading edge of electric vehicle adoption, and KBB says it "offers a better balance of range, practicality, refinement and value" than any other electric car. For 2013, Nissan was able to reduce the base price into the range of hybrid cars. City/highway/combined mpge: 130/102/116; Range: 75 miles

"The 2013 Nissan LEAF marks a turning point in the electric vehicle movement with increased content at a reduced price that makes the vehicle competitive with traditional cars in its segment. We're seeing buyers diversify beyond early adopters, and, as the global leader in electric vehicles, Nissan is committed to providing affordable zero-emission options for the mass market," said Erik Gottfried, Nissan director of electric vehicle sales and marketing.

2013 Tesla Model S: This all electric luxury car has been receiving rave reviews and is being extremely well received by owners. This led KBB to say "the 2013 Tesla Model S is the electric car most likely to gain mainstream success." Given the price of that car, we assume KBB means that "mainstream success" to be within the luxury car market segment in which the Model S competes. The Model S is reportedly selling extremely well, for its market segment, and may have outsold the Nissan Leaf in the Q1 2013. City/highway/combined mpge: 88/90/89, Range: 265 miles

2013 Ford Focus Electric: This under-appreciated, but excellent, electric car from Ford has cool technology coupled with a powerful drive train which KBB says is a "practical runabout for green-leaners." City/hwy/combo mpge: 110/99/105, Range: 76 miles

2013 Chevy Volt: This plug-in hybrid is also at the leading edge of electric vehicle adoption. As KBB said, "Volt is the clear choice for those who want more electric range than a typical plug-in hybrid, but more total range than an all-electric." First 38 miles: 98 mpge combined, Next 344 miles: 37 mpg combined

2013 Toyota Prius Plug-in: Toyota finally began manufacturing what some Prius have been doing to their cars, adding a bigger battery pack and the ability to plug in. It's short electric range keeps it from being great. First 11 miles: 95 mpge combined, Next 529 miles: 50 mpg combined

2013 Ford C-MAX Energi: This is one of Ford's plug-in hybrids, and matches the Prius v in size but with twice the electric range of the Toyota Prius Plug-in. The C-MAX Energi is selling well, and has the fastest electric mode of any plug-in hybrid. First 21 miles: 100 mpge combined, Next 599 miles: 43 mpg combined

“The Jetta Hybrid is a hybrid vehicle that doesn’t make consumers compromise—it’s a practical, fuel-efficient daily commuter infused with Volkswagen’s “fun-to-drive” DNA,” said Rainer Michel, Vice President, Product Marketing and Strategy, Volkswagen of America, Inc. “We’re honored that the expert editors at KBB.com have recognized the 2013 Jetta Hybrid as one of their top green cars this year.”

"Consumers only have one choice for the most energy efficient electric vehicle – the Honda Fit EV. What's more, its power and handling make it one of the most fun-to-drive EV's available," said Art St. Cyr, vice president of product planning and logistics at American Honda. "This recognition from KBB.com further highlights the tremendous environmental and customer value that the Honda Fit EV offers."

2013 Lincoln MKZ Hybrid: This is a well-appointed hybrid luxury car that KBB calls a "modern technological powerhouse on all fronts". City/hwy/combined mpg: 45/45/45

LasPaled wrote on April 20, 2013 - 7:10pm Permalink
Took delivery of my Leaf S yesterday. Base model that it is I am very pleased, the price was right, and I will use it as my commuter. I gave my Luxury Chevy Volt to my wife for her daily commuter as well as our get-out-of-town car.