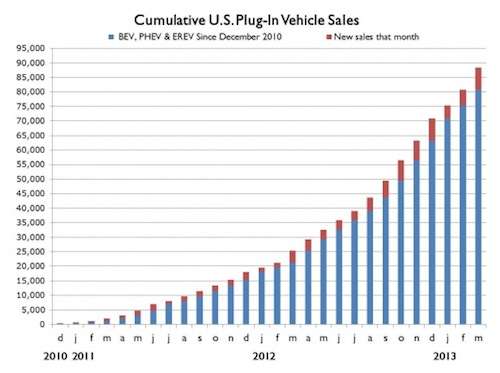 March 2013 electric car sales best ever according to EDTA, led by Leaf and Model S sales

Nissan Leaf and Tesla Model S sales are surging, leading to the highest ever monthly sales of electric cars for March 2013.
Advertisement

How do we interpret this when EDTA claims there were 9,191 battery electrics sold in 2013 and Nissan accounts for only 3,549 of those cars? Where do these numbers come from? Is the EDTA making them up?

The largest selling electric car in North America so far in 2013 was not the Nissan Leaf, but the Tesla Model S. Unfortunately that claim has not been fully verified, because Tesla Motors does not release monthly sales figures. Over the weekend when the company announced it was likely to be profitable in Q1 2013, Tesla also said that Model S sales in Q1 2013 was approximately 4,750 units. A couple weeks earlier Tesla claimed they'd been delivering over 500 Model S's per week. We'll know better when Tesla makes their Q1 2013 SEC filing in 2-3 weeks, because those filings contain certified audited results.

Another factor in this is the growth of Nissan Leaf sales following the release of the 2013 Nissan Leaf. The base MSRP of the 2013 Leaf is only $28,800 putting its price within the range of the hybrid cars, and making it more attractive to prospective customers.

JP White wrote on April 6, 2013 - 9:40am Permalink
The comment that March 2013 is the first month when all electric vehicle sales outpaced plug-in hybrids is not strictly true. From April - Sept 2011 BEV sales outpaced PHEV's thanks to higher LEAF vs Volt Sales This occurred again in Jan 2012 thanks to higher LEAF sales again. As reported here March 2013 saw a repeat performance. What is different about March 2013 is that this is the first month its been necessary to combine BEV sales for them to outpace PHEV sales vs just comparing LEAF vs PHEV sales. I used hybridcars.com as a source for my sales comparisons.