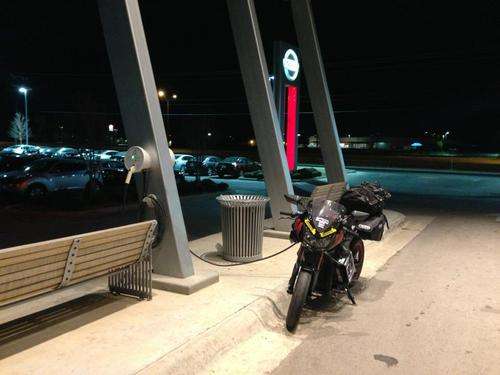 How did Terry Hershner travel 3500+ miles on an electric motorcycle in 6 days?

Who says short range electric vehicles can only be ridden for short distances? Not Terry Hershner, a Tampa Florida resident who is in the middle of a cross country trip with his 2012 Zero S electric motorcycle. In order to attend Zero's launch of their 2013 model line at the Progressive International Motorcycle Show in Long Beach, California this past weekend, Hershner set off from his home on his Zero S and rode it cross country in six days. His total distance covered was over 3500 miles (he made a detour to Miami before leaving Florida), and he plans to ride the bike back home for a total trip distance of nearly 7000 miles.

For a look at what the trip was like for Hershner, see: Terry Hershner Drives 3000 Miles On An Electric Zero Motorcycles. To learn what technology was involved, read on.

The stock configuration of the 2012 Zero S ZF9 has a highway range of 63 miles, and a charging time of 9 hours. That would have required approximately 500 hours of charging and made the trip nigh on impossible. However, Hershner has already made a couple longer distance trips with his bike, and is no stranger to modifying it. It was Hershner's Zero S which Jeremiah Johnson rode during the TTXGP World Championship at Daytona in October. And earlier this year Hershner rode his bike to a conference in Tennessee, a distance about 1200 miles from his home in Tampa.

How can an electric vehicle with a 63 mile range possibly take such a long journey? Especially when that vehicle is a motorcycle with little room for additional batteries?

The answer has to do with the charging rate. For the trip, Hershner is carrying five chargers that together drop the charging time from 9 hours to under 1 hour. His charging setup let him ride for 45 miles, then charge for 45 miles, and to cover about 500 miles per day.

Zero has long sold an optional charging setup comprising multiple chargers connected in parallel. The maximum configuration sold by Zero is four DeltaQ QuiQ chargers, in parallel, for a 2.4 hour full recharge time. While faster than 9 hours that still would not have been fast enough for Hershner's cross-country ride.

Instead his setup used three of the DeltaQ QuiQ chargers plus two Elcon PFC 2500 chargers. Additionally he installed a 3rd party J1772 port so that he could access public charging stations during the trip.

Most 120 volt power outlets support 20 amps maximum, and most buildings have multiple power outlets outlets on several circuit breakers. Each 120 volt outlet would be enough for 2 or maybe 3 of the QuiQ chargers, or one of the Elcon chargers. This means, in theory, any building has enough 120 volt outlets to let Hershner's charging setup run at full power. If given enough extension cords.

Charging with Hershner's setup at a public electric car charging station is simpler. The 3rd party J1772 adapters have a NEMA 14-50 outlet on one side, and a J1772 socket on the other (NEMA 14-50's are rated for 240 volts, 50 amps, and are typically used for clothes dryers). Most of the charging stations provide 208 volts (some provide 240 volts) and can handle a 35 amp or so charging rate. If at such a charging station, he could simply plug all the chargers into the J1772 adapter.

Hershner's Facebook page recounts a few examples. While still in Florida he'd run out of power a couple miles short of a campground where he planned to use NEMA 14-50 outlets for a fast charge. Fortunately he was in front of a convenience store, where he'd planned to snag some coffee anyway, and the store manager let him use a power outlet for a convenience charge.

Another story occurred in West Texas. The ChargePoint maps show a public charging station owned by Oncor Electric in Big Springs Texas, and Hershner's plan hinged at using the Oncor stations. When he arrived at the location he found the station wasn't available for public use. Hunting around he did find a truck service center who kindly let him plug into a power outlet normally used for welding equipment. He wrote in the facebook posting that "I'm learning so much on this trip that electricity is everywhere, you just gotta be resourceful to find it."

“I just wanted to prove a point and show that we aren’t far away from real cross country travel on electrical vehicles. My Zero performed flawlessly and allowed me to cover an average of 500 miles a day,” said Terry Hershner. “I also learned a lot about the electric vehicle charging infrastructure and while we’ve made great progress there is still a ways to go to build the system out on a national basis. I hope to showcase the growing infrastructure by doing similar cross country rides in the future."

“Terry Hershner is a pioneer in the world of electric motorcycles. His determination to accomplish such a feat speaks volumes about his character and we are thankful to have him as part of the Zero family,” said Scot Harden, Vice President of Global Marketing for Zero Motorcycles. “This also speaks volumes about the future of electric motorcycles. The Zero S performed flawlessly and is now ready for its trip back home to Florida.”

Hershner has a second trip ahead of him in the immediate future, his return home, after taking a "short" jaunt up to the SF Bay Area to visit the Zero Motorcycles headquarters. He plans to set out from California at the end of December, on his motorcycle, making it the first cross-country trip on an electric motorcycle.