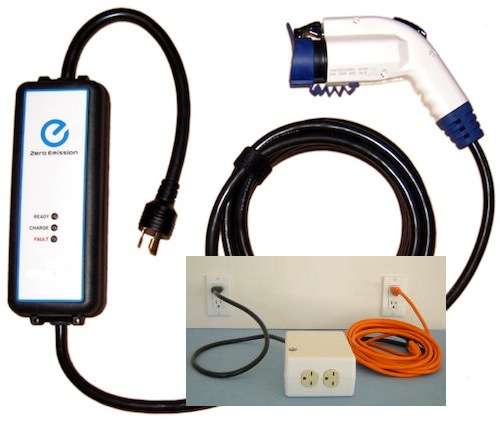 How to charge your electric car from 120 volt power outlets

With careful preparation you can charge an electric car at full speed from 120 volt electrical outlets, making use of ubiquitous the electricity supply, but only if done correctly.
Advertisement

What if the state of charge on your electric car is running low, and the Recargo or Plug Share app's do not show a nearby charging station? Are you out of luck and your only choice is to call a tow company and paying a large towing fee? Electricity is everywhere, but the powers-that-be decided electric cars must be charged through plugs designed for that purpose. The U.S. the ubiquitous outlet offers 120 volts through a plug that's not certified for electric cars, and in any case the low charge rate (1-1.5 kilowatts) on 120 volt outlets means an ultra-long recharge time. Some DIY types are taking matters into their own hands and developing adapters to recharge electric cars, at reasonable speed, through any 120 volt power outlet. But some care must be taken to do this successfully.

The first item to understand is the EVSE, which means Electric Vehicle Service Equipment. The EVSE is the technical name for the "charging station" and is the approved method for charging an electric car. It includes a number of safety features, such as an interlock preventing the car from driving if it is plugged into an EVSE. Obviously a "drive off" from a charging station could be dangerous, and expensive. You'll notice that electric cars do not have a normal power outlet, but instead have a J1772 charging port.

One of the hindrances to electric vehicle adoption is the rate at which EVSE's are being installed around the country. Charging stations aren't always where we need them to be, and some cities are seeing a low rate of EVSE installation. This creates a condition in which it's extremely desirable to work out a method for using normal 120 volt outlets to charge electric cars. This way electric vehicle owners can still charge their cars, even if their local EVSE network is insufficient.

Every electric car comes with a portable EVSE meant to plug into 120 volt outlets. These adapters support a modest charge rate of at most 12 amps, sometimes less. The 12 amp rate corresponds to a 1.4 kilowatt charge rate, which in turn is why charging at 120 volts could take as much as 20 hours for a full recharge. Still, if this is your only choice to charge your car it's what you'll do.

Some electric car owners with short commutes find they can get along without a level 2 EVSE at home, and simply rely on the 120 volt EVSE and a normal power outlet in their garage.

Some of the level 1 120 volt EVSE's can be upgraded (primarily, the one which comes with the Nissan Leaf) to support either 120 volts or 240 volts, and bump the maximum amperage to 16 amps. The 240 volts 16 amps, charge rate is the same as the level 2 EVSE's meaning that one can feasibly skip buying a normal EVSE, get the 120 volt EVSE upgraded to 240 volts, and enjoy the same charge rate. The upgrade service is offered through EVSEupgrade.com. The warranty on your car remains intact, but the upgrade does, of course, void the warranty on the 120 volt EVSE.

This is great if you have a 240 volt outlet available, but in the U.S. these outlets are rare. This is where the Quick220 gizmo comes into play, as well as some tricky details on the design of the electrical system. Every house in the U.S. has 240 volt service, but rarely has 240 volt outlets. A 240 volt outlet is powered by two 120 volt hot wires that are 180 degrees out of phase. What this means is that by connecting two 120 volt outlets together in the right way, you'll have a 240 volt outlet, but only if done correctly by finding two outlets which are on opposite phases. Do it incorrectly and the results will be messy. The Quick220 gizmo does it correctly. Alternatively, schematics are available in some corners of the Internet to build your own.

The non-upgraded 120 volt EVSE's should work well on pretty much any 120 volt electrical outlet, because the 12 amps or less charge rate is much less than the typical 15 amp circuit breaker. But what if the circuit you plug into has old or thin wires? What if the outlet itself is old and corroded? What if there are other devices, like a refrigerator, on the same circuit? The safest result is if the circuit breaker trips, but thin wiring carrying high current might heat, which could have disastrous results.

Likewise you may have an old extension cord lying around, but is that cord rated to handle the current to charge your car? It's best to look for the heaviest duty extension cord you can find, preferably one using 10 gauge wires.

With care one can use the right adapters to enable full power electric car charging even if no level 2 EVSE is available. But as we've seen, one must do this carefully. ALWAYS make sure you plug your electric car into an outlet you know is rated to handle the high current of charging. Where possible, use a real properly installed level 2 EVSE, because it'll be safer and more straight-forward.

Nicolas Zart wrote on June 30, 2012 - 10:48pm Permalink
The only problem I ever found recharging on the go was when I was at a friend's house, or mine and tried to plug into a non-grounded plug. Nicolas
Suthy wrote on July 1, 2012 - 6:15pm Permalink
Everywhere the word "ubiquitous" appears the author shows that he has no idea what the word means or how to use it properly in a sentence. Where is the editor here?
Frank Sherosky wrote on July 1, 2012 - 7:32pm Permalink
When I was working on the travel charger program for GM it was well known that there is no extension chord allowed in the U.S.A. electrical code for 240V; one end always has to be hard wired or the appliance (car in this case) has to be directly connected to a hard-wired wall plug; thus no intermediate connections as in extension chord. So, based on that, the only voltage available for the travel chord/plug had to be 120V. That means anyone who tries to build a 240V travel chord is in direct violation of the national electrical code which introduces an insurance risk; unless that has been changed somehow, and I'm simply not aware.
Greg wrote on September 24, 2014 - 12:02pm Permalink
Interesting. However, a cord itself isn't voltage-specific, only the configuration of the plugs on the end is. Ask anyone who has a 240V welder they've needed to use with an extension cord. Any cord will do, so long as it's thick enough to carry the watts. You just need an adapter to be able to plug the normal 3-prong 120V 15A plug into the 240V outlet (and another to put the 240V plug of the welder into the other end) and you're all set.
Rob wrote on July 1, 2012 - 7:44pm Permalink
The primary issue with this article part from some bizarre sentence structure is that it is completely self contradicting. The premise seems to be that it is either impossible or very complicated to charge from a 120v outlet or possibly even dangerous. However the entire article is debunked by one line within it, "Every electric car comes with a portable EVSE meant to plug into 120 volt outlets. These adapters support a modest charge rate of at most 12 amps, sometimes less" So the article could have read, How to charge your electric car from 120 volt power outlets. Use the included cable. The end.