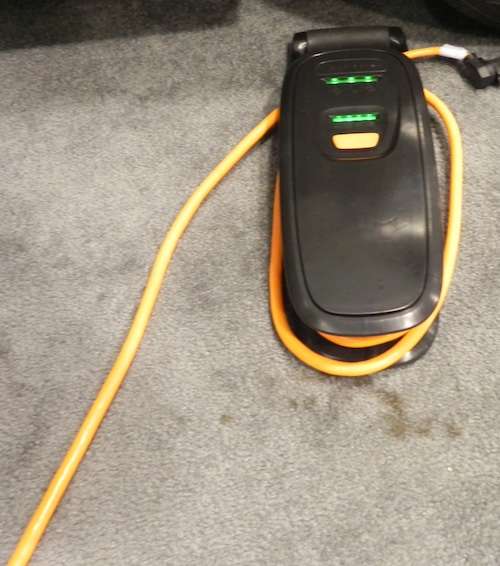 GM has begun replacing the 120 volt charger which comes with the Chevy Volt, replacing it with a unit having thicker gauge wiring on the 120 volt side of the adapter. This follows occasional reports by Volt owners that the cords overheat during use.

The news comes from a report on Yahoo Autos that in turn references discussion on a GM Volt discussion forum. A Volt owner related that he'd brought his car in for repair on a different issue. During the process the dealer replaced the 120 volt charger explaining it as part of a "recall" that isn't a "big deal" but is more of a "preventative measure". However the report on Yahoo Autos quoted GM spokesman Randal Fox as saying it is not officially a recall, but a "customer-satisfaction program".

The process simply replaces the existing 120 volt charger (standard equipment with the Chevy Volt) with a new one. The new charger is reported to have thicker wiring on the 120 volt side, and otherwise be the same. Chevy Volt owners will shortly receive letters notifying them of the upgrade.

In the past GM insisted the 120 volt charging cords were safe despite the occasional report of hot cords. GM has previously maintained hot cords must be due to wiring problems in the outlets, rather than the charging cords. However, Electrical engineers who have inspected the charging cords note that they were constructed with 16 gauge wire. Wire that thin is barely adequate to the task of carrying the 1.5 kilowatts (or so) charge rate at 120 volts, especially over the long periods required to recharge a car. The "hot cord" behavior is consistent with having used a thin gauge wire.

The new chargers are reported to have 14 gauge wire and is a "more industrial looking plug and cord." The thicker wire is consistent with decreasing cord heating due to thin wire.

As an exercise to understand the difference, take a trip to a hardware store with a large selection of extension cords. Study the labels looking for two values, "gauge" and "amps". Notice the extension cords with 12 gauge wire are rated for more amps than the cords with 16 gauge wire. What GM had done is choose the 16 gauge wire, limiting the amps the charging cords could safely carry.

Hence, while GM can maintain the occasional hot charging cords is due to user error, the action they've taken is consistent with having designed the charger with a cord that's too thin for the application.

Randal Fox is quoted saying "It's just an effort to offer a more consistent charging experience. It's not a safety recall. It's more of a customer-satisfaction program. We made some enhancements to the design to add some durability and reliability."