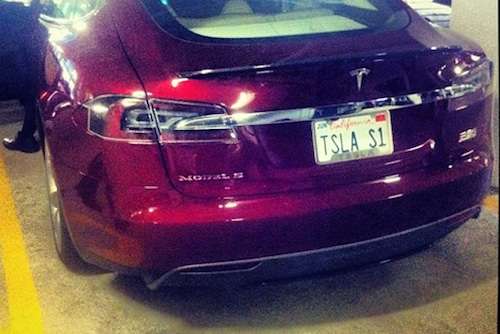 The Tesla Model S Signature Series is slated to begin delivery on June 22, about 2 weeks from now, but that didn't stop Tesla from delivering Model S #001. Apparently it pays to be a venture capitalist investor in Tesla and a member of Tesla's board, because the delivery was reportedly made to venture capitalist and Tesla board member Steve Jurvetson.

According to a report on the Business Insider, Twitter user Evan Moore spotted the delivery at the Stanford Graduate of Business. Of course he whipped out his cell phone, snapped a picture, posting it to Instagram and Twitter. The picture shows the rear end of a red Model S, with a license plate reading "TSLA S1," in a parking garage.

How did Jurvetson, and not Elon Musk, get to be the purchaser of the first Model S? The Mercury News reported back in 2010 that Jurvetson was simply the johnny-on-the-spot. He'd seen details of the Model S in the information packet given to directors in 2009, and badly wanted one of the cars. Immediately when the Board set the price of the Model S, Jurvetson immediately whipped out a blank check and filled it out for the full price, which starts at $87,900, on the spot, beating Musk to the punch. Musk is reportedly driving #002 around the LA area right now, of course.

The Tesla Model S is an all electric luxury sedan, and because it's designed by Tesla Motors the features go way beyond what we think are the limits of electric vehicles. The company knows that for electric vehicles to gain wide adoption, all the stereotypes (electric vehicles can only be slow ugly boring golf carts) must be smashed to tiny bits.

The Model S Signature series is limited to the first 1000 cars to be built, and comes in two models, the base model, priced at $87,900, and the performance model, priced at $97,900 (both prices after $7,500 federal tax break). Both have an 85 kilowatt-hour battery pack, delivering a 320 mile range, according to Tesla's testing at a constant 55 miles per hour speed. However with a 0-60 time of 5.6 seconds (or for the Performance model, 0-60 time of 4.4 seconds), it's unlikely a Model S would stay at such a sedate speed. The official EPA efficiency ratings have not yet been released.

The car targets the luxury car category and comes with a slew of high end features. One of the most stunning of which is the all-glass panoramic roof, allowing many of the advantages of a convertible car without getting your hair messed up in the wind.

Tesla is slated to begin deliveries on June 22nd, marking the occasion with a big ceremony that will be webcast live through the teslamotors.com website.