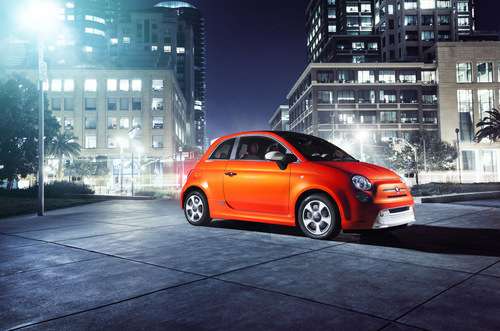 Chrysler's newly hired Director for Electrified Propulsion says more electrified vehicles are in Chrysler's future, and that the Fiat 500e is just the start.
Advertisement

The Fiat 500e may be getting dismissed as a "compliance car" but it's very attractive, and a blast to drive, and recently won an award from the Northwest Auto Press association. Is this going to be Fiat/Chrysler's only entry into the electric vehicle market, with which they fend off customer demands for electric cars? According to an interview posted late last week by the Detroit Free Press, Chrysler is planning more electric cars, and hired the away the Chief Engineer for the Chevy Volt powertrain to work on those new cars.

Chrysler had revealed plans during the 2008-9 time frame for an exciting range of electric cars, but their bankruptcy forced those plans onto the shelf. They recently began shipping the all electric Fiat 500e in April, and it has already sold out (perhaps due to the small production volume).

Mike Duhaime, former Chief Engineer for the Chevy Volt is now Global Director of Chrysler’s electrified propulsion and engineering. This puts him in the position to develop a whole new line of electric or plug-in hybrid or hybrid cars through Chrysler. He told the Detroit Free Press, “The 500e is just the first step. There will be additional electric vehicles at various degrees of electrification — all the way from battery electric down to (stop-start).”

However positive that sounds for future electric vehicles, the actual plans revealed in the interview are limited.

First, the company is working Detroit-based NextEnergy to develop vehicle-to-grid (V2G) capabilities. The idea is that when an electric car is plugged in to a charging station, not only does it suck electricity from the grid to recharge the car, it can use energy stored in the car to send power back to the grid. One version of this idea is to power ones house during a power outage, but generally its purpose is to help mitigate brown-out situations or other power grid stability concerns.

Second, Chrysler introduced start-stop technology for the RAM 1500 pickup truck. This increases fuel efficiency by automating a hypermiler technique of stopping the engine when idling such as at a stoplight. Start-stop technology utilizes a battery that's larger than regular car batteries, but smaller than hybrid vehicle batteries, to aid with automatically stopping the engine if it would otherwise be idling, and to restart the engine when it's time to go again.

According to the interview, Chrysler plans to introduce this technology for their other vehicles.