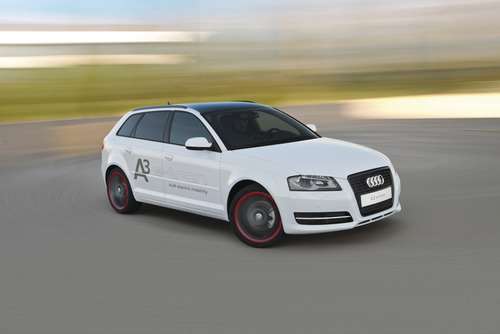 Audi's latest e-tron, the A3 e-tron wagon, is a plug-in hybrid will demonstrate what Audi believes is the future of mobility.
Advertisement

Audi's A3 e-tron will provide a glimpse into the future of mobility, as envisioned by Audi. The Audi A3 e-tron will be on display at the 2013 Geneva Motor Show in March, sporting a plug-in hybrid drive train and rather nice performance characteristics.

The Audi e-tron line is their electrified car line, and since 2009 Audi has shown several different e-tron concepts including a sports car with four electric motors, one for each wheel. In their press release, Audi is claiming to be "working intently to electrify the drivetrain using plug-in hybrid technology." Many believe that the initial wave of plug-in car electrification is better served by the plug-in hybrid model rather than the pure all electric model. That is, until a generation or two further of battery development results in better batteries.

A 30 mile electric-only range puts it just below the Chevy Volt and above the Ford Energi's in terms the extent of electrification. Given that the average American drives 40 miles or less per day, the A3 e-tron would enable most driving to be on electric power.

The combustion engine is a modified 1.4 TFSI producing 110 kW (150 hp). A clutch links that engine together with a 75 kilowatt electric motor (100 horsepower). A newly designed six-speed e-S tronic transmission transfers the power to the front wheels.

The car can be driven in one of three modes: Engine only, Electric only, or Hybrid mode

The A3 e-tron was announced at the 2012 TED conference. Audi is also working on sound engineering to design the appropriate e-tron sound.