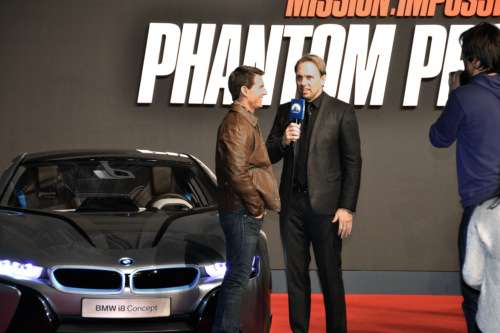 (TorqueNews) MUNICH - On Friday night, BMW Welt in Munich hosted the European premiere of the latest movie in the Mission: Impossible franchise, “Mission: Impossible – Ghost Protocol.” Tom Cruise, who plays special agent Ethan Hunt, was at the premiere, together with a stellar line-up of BMWs which also starred in the movie.

BMW supplied most of the cars that appear in the movie, and is helping to promote it, together of course with their cars. According to Ian Robertson, member of the Board of Management of BMW AG, responsible for Sales and Marketing, “We are very proud to be part of this outstanding cinematic event. The new ‘Mission: Impossible’ movie takes action-packed excitement to the next level – which makes it the ideal platform for presenting our vehicles and technologies.” Indeed, their ConnectedDrive and EfficientDynamics actually form part of the thriller’s plot.

At one point in the movie, Cruise’s character drives the BMW i8 with Vision EfficientDynamics, a BMW concept car with a lot of high tech features that help him navigate the traffic on the streets of Mumbai. The rest of us will have to wait until 2014 for a chance to drive it, when the plug-in hybrid sports car is expected to reach production. If it performs half as well as it looks, it will be sensational.

BMW’s ConnectedDrive, however, also used in the movie to provide a visual display of detailed maps and collision warnings, and allowing voice-activated phone functions, is available now, even for us non-secret agent types.

The BMW X3, a Sports Activity Vehicle with BMW’s xDrive intelligent all-wheel drive, and the BMW 6 Series convertible both star in a chase scene through a sandstorm in Dubai. Unfortunately, the cabriolet gets more than a little banged up in the process. Sniff. Meanwhile the compact BMW 1 shines in the streets of Mumbai.

While the Mission: Impossible partnership with Paramount Pictures is certainly high profile, the BMW Group has a long history of involvement with the arts. That includes not only product placements in TV and film, but the BMW art cars, and support for film teaching and events. They’re the main partner of the Berlinale, Berlin’s international film festival. They also support the Regensburg Short Film Week, the Landshut Short Film Festival, and the Bavarian Film Award. Of course, they’re also known for their own commercials, especially Rampenfest, a mockumentary that went viral about a small town in Bavaria building a huge ramp to launch BMWs to America.

“Mission: Impossible – Ghost Protocol” will be in theaters shortly before Christmas.

Other articles about BMW:

Jeff Koons turns a BMW M3 into a piece of art

Michael Adamson wrote on December 12, 2011 - 5:41pm Permalink
I'm not really a car fanatic but after downloading the movie from DownloadThatMovie.com I was very impressed with the movie. Tom Cruise scaling the Burj Khalifa (tallest building in the world) was a highlight for me, and what made it more impressing is that it was Cruise himself doing it. It proves he still has his fearless acting skills from his younger heydays.