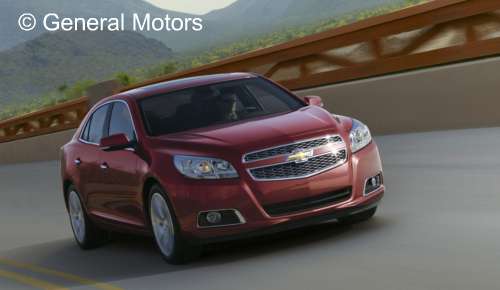 2013 Malibu prototypes test driven for 22 months, on six continents, to make sure this new Chevy will be ready for global production
Advertisement

You hope the manufacturer of your new vehicle has thoroughly tested it before releasing it to the market, in order to ensure that it is as safe, comfortable and efficient as possible. Obviously, field testing under different conditions takes time and can run up a lot of mileage, but with the 2013 Chevrolet Malibu, GM’s engineers seem to have gone to excess.

That’s because not only has the Malibu been totally redesigned, but it’s meant to go on sale globally. GM’s planning on selling it in close to 100 countries, a first for a midsized Chevy sedan. Making sure it would make all those potential customers happy meant a lot of testing.

“You learn a lot about a car when you spend so much time in it – and that’s exactly the point,” said Mark Moussa, global chief engineer. “In the last year and a half, during every minute of the day, a 2013 Malibu has been driving somewhere around the world – all to make it the best car it can be.”

They’ve been testing since early 2010, using a fleet of approximately 170 pre-production vehicles, in order to check out the 13 powertrain combinations and various equipment packages planned for the 2013 Malibu. GM hand-built the driveable prototypes and sent them around the world, for testing on GM’s proving grounds and on roads in the US, Canada, England, Germany, Dubai, South Korea, China and Australia.

Of course the powertrains, suspensions and other components had been tested before the pre-production cars had been built, but the extensive road-testing allowed the engineering team to fine-tune all aspects of the car’s performance. The pre-production cars travelled through Death Valley and to the top of the Rockies. They were subjected to long road trips with winding hills, and many miles (and hours) of rush hour traffic in both Seoul and Chicago.

“Along with more significant differences among markets, such as powertrains, there is a myriad of small details that vary in markets around the globe and they must all be validated in real-world driving tests,” said Moussa. “Even small things such as holders for toll change or tickets vary for different markets. In Korea, for example, the hazard lights are often used as a ‘thank you’ to other motorists, so the long-term durability of the switch must be ensured.”

They had to test 11 different types of tires to find one that could deal with Asian monsoons, while not producing an unpleasant noise in the dry season from travelling over the concrete roads which are deeply grooved to remove water. Some cars were subjected to salt and slush, others were left out in the Arizona sun.

The new Malibu will be produced in the US (Michigan and Kansas) and elsewhere.

The first new Chevrolet Malibu is built in Korea