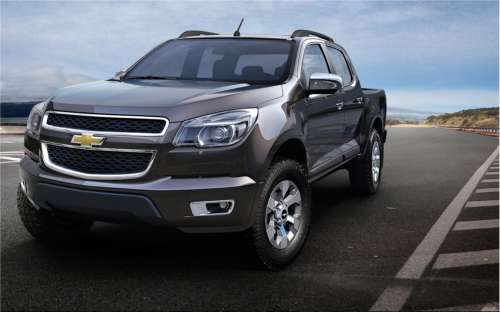 Chevrolet Truck History: From the 490 Half-Ton to the Silverado and Beyond

In honor of its 100th Anniversary, Chevrolet has listed several trucks that made it the brand it is today, including the 2011 Silverado.
Advertisement

While Chevrolet was founded in 1911 as a collaboration between racer Louis Chevrolet and entrepreneur William Durant, it wasn’t until January 1918 that it started producing trucks. Chevy’s been producing trucks ever since. Here are several Chevy trucks that represent the brand and its history.

1918 Chevrolet 490 Half-Ton Light Delivery “Cowl Chassis”
The 490 Half-Ton was Chevy’s first truck. Based on the 490 car platform, but with stronger rear springs, the 490 was sold for $595 as a chassis only. It was up to the buyer to install a cab and bed or a panel van body, depending on what it would be used for. A one-ton Model T (for truck) was also available for $1,125. Again, it came bodiless, but unlike the 490 was built on a truck frame. Both vehicles were powered by four-cylinder engines. The 1918 Chevrolet Model T engine could produce 37 horsepower. Its speed was governor-limited to 25 mph. It wasn’t until 1929 that Chevy started using six-cylinder engines. By 1930, light-duty trucks came with factory-built cabs and bodies.

1937 Chevrolet Half-Ton Pickup
This was the first Chevy half-ton to be designed from scratch, rather than adapted from a pre-existing car design. It was stronger than its predecessors, and had a bigger 78-horsepower engine. It must have been reasonably sturdy, because they sent one on a 10,245 mile road trip around the US. Despite carrying more than 1,000 pounds of cargo in its bed, it managed a respectable 20.74 mpg.

1947 Chevrolet Advance-Design Half-Ton Pickup
The 1947 Advance-Design trucks were the first redesigned GM vehicles since World War II. A larger cab and wider box were key elements of the redesign. Trucks became increasingly popular after the war. Whereas cars outsold trucks 4:1 beforehand, by 1950 the ratio had dwindled to 2.5:1. The Advance-Design trucks are still popular today, being sought after by hot-rodders and collectors. According to Chevy, the 2003-2006 Chevrolet SSR roadster paid tribute to the Advance-Design styling.

1955 Chevrolet Cameo Pickup
One of Chevy’s Task-Force trucks, it was possible to order the Cameo pickup with Chevrolet’s new small-block V-8. The Cameo had a more car-like interior than most trucks. Its style was aimed at well-off suburbanites rather than those who needed a truck for work. In 1957, 4-wheel drive became an option on some Task-Force models.

1959 Chevrolet El Camino Passenger-Car Pickup
The El Camino in its many incarnations was the truck that looked and performed like a muscle car. The 1959 version came with tailfins and chrome, but was a half-ton truck. The 1964 version was based on the Chevelle. Later model years allowed buyers to order a big-block V-8, and even a Super Sport package. Loved or hated, it was most definitely not overlooked.

1967 Chevrolet C-10 Pickup with Custom Sport Truck Package
Chevrolet introduced a fresh exterior for the C-10, with a lower profile cab. Coil springs were added front and rear. But it was the interior that really benefited from changes. The Custom Sport Truck package allowed buyers several car-like upgrades, even including the option of bucket seats. More people were buying trucks to pull trailers or adding campers to the back, so comfort was increasingly important.

1973 Chevrolet Suburban with Super Cheyenne Package
Chevy’s been continuously producing the Suburban since 1935, a longevity record no other nameplate can match. The 1973 version was truck-based, making it longer, stronger and roomier than other wagons. It had four doors and space for nine passengers, all powered by a small-block V-8. The Suburban could be ordered in standard two-wheel drive or as a 4x4. Today’s Suburban is an SUV rather than a wagon, but still features lots of space and towing power.

1999 Silverado 1500 Extended-Cab Pickup
Hard to believe the Silverado was only introduced in 1999. This full-size pickup grew out of the 1988-1999 C/K trucks. It had a new modular frame construction, making it the most rugged Chevy yet. Despite the hard exterior, the interior offered many luxury features. Newer generations benefited from improved handling, smother ride, and more powerful engines, increasing the payload and towing capacities. The Silverado HD picked up the Truck of the Year award from Motor Trend Magazine in 2011, the fourth Silverado to do so.

What’s next for Chevy trucks? Chevrolet’s planning a new Colorado pickup for the global market. It’s already available in Thailand and there are plans to build it in Brazil (Chevy’s second largest market) and elsewhere, including the US. Details have yet to be announced, but one thing’s certain. Chevrolet intends to be around for some time to come.

Rvs for sale wrote on December 15, 2011 - 1:10am Permalink
Its an very nice news that Chevrolet has completed its 100th Anniversary , i was not knowing the full history of Chevrolet mentioned in this article is given very clear, thanks for sharing such an nice information.