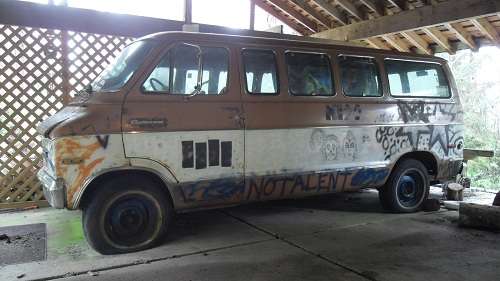 A ragged and beat-up 1972 Dodge Sportsman Royal van that hasn't been running for years, has been listed on eBay for a starting price of $50,000. The high asking price is not because the van is rare, but the “Melvan” has drawings on the side that were drawn by late Nirvana frontman, Kurt Cobain.
Advertisement

The van was once used by a Washington-based grunge rock band, The Melvins. It was used to get to gigs and shows all across the country, and it's nickname “The Melvan” is an appropriate name.

However, what really justifies the high asking price is not that it was used by the Melvins, but the several Kurt Cobain drawings on the van. Probably the most noticeable is a drawing of the band members of KISS, the well known rock band. The Nirvana frontman even drove this van on occasion to take The Melvins to shows. (Unfortunately Cobain took his own life in 1994.) Cobain was a huge fan of the The Melvins back when they were around.

The listing states, "The KISS mural on the side was hand drawn by Kurt Cobain using sharpie markers shoplifted from the Thriftway grocery store in Montesano, Washington.” Who knows if this story is true or accurate though.

According to Forbes the current owner, Ben Berg, got the van when he was 16 back in 1992 as birthday gift from a Melvin's Bassist family member. At that point in time he probably thought it was just a funky old van. He learned about who really did those drawings on the side years later.

Berg really likes the van, but it seems the terrible economy has been tough on him, just like a lot of people. He hopes to use the money he will make from selling the Melvan to pull himself out of a financial hole. Helping him is Mitch Holmquist, a friend who has sold rock memorabilia on eBay for a number of years. He uses the user name taddoyal, named after the grunge rock band Tad.

Could the Melvan suffer the same fate as Obama's Chrysler 300C? It is more likely a Nirvana fan with quite a bit of money will be interested in this rock memorabilia. I hope whoever buys it at least saves a bit of money to fix the van so it can run.

Nicolas Zart wrote on March 16, 2012 - 4:57pm Permalink
"Come as you are, as you were, as I want you to be, memoria" Wonder how much that one will score.
Adam Yamada-Hanff wrote on March 16, 2012 - 10:04pm Permalink
I think $50,000 is a high asking price, but I am sure there are people who are willing to pay a lot more. I hope the person who buys it actually fixes it up to run and work properly.
Anonymous wrote on March 17, 2012 - 2:35pm Permalink
As far as buying/saving on eBay goes: If you see an item that you want listed in auction format, send the seller a message asking if they will accept $x to end the auction early and sell the item to you. May be telling them that they would not have to wait as long to get their money (they would probably know that, but it still might help). If that does not work, use a sniping service such as Bidball.com to bid for you. It'll bid in the last few seconds, helping you to save money and avoid shill bidding. If there is a particular item that you want that is relatively rare on eBay or goes fast when one is listed, use ebuyersedge.com to set up a saved eBay search for it. You'd get an e-mail whenever a match is listed. You can use the price, category, exclude word, etc. filters to narrow down the list of results that you receive in the e-mails. Excellent for "Buy It Now"s priced right. If the item that you are looking for is difficult to spell, try a misspelling search site like Typojoe.com to hopefully find some deals with items that have main keywords misspelled in the title. Other interested buyers may never see them.
Adam Yamada-Hanff wrote on March 17, 2012 - 5:42pm Permalink
Thanks for the ebay tips!
Nicolas Zart wrote on March 19, 2012 - 3:37pm Permalink
Yes, it seems $50K is a little steep but you never know. A Nirvana collector could have deep enough pockets and just wants it. Another thing is that some of the generation who listened to Nirvana when it came out is probably making enough money to add this to their collection of Kurt guitars.
Adam Yamada-Hanff wrote on March 19, 2012 - 3:40pm Permalink
I was right! The auction ended with no bidders for $50K! :)