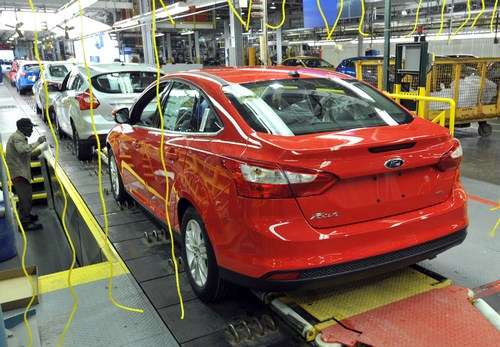 Ford has announced they will begin to payout a quarterly stock dividend again. This comes after a 5 year hiatus in dividend payouts by Ford.
Advertisement

It makes a lot of sense that Ford has decided to do this since it has had 10 profitable quarters in a row and earned $1.65 billion in the three months that ended in September. As well a 4 year contract with Ford's 40,000+ UAW workers was recently negotiated successfully.

At 5 cents per share the stock dividend payout might seem small to most, but this dividend payout is estimated to cost Ford $200 million per earnings quarter. Stockholders can expect to receive payouts in 2012.

“We have made tremendous progress in reducing debt and generating consistent positive earnings and cash flow,” said Bill Ford, executive chairman, Ford Motor Company. “The board believes it is important to share the benefits of our improved financial performance with our shareholders. We are pleased to reinstate a quarterly dividend, as it is an important sign of our progress in building a profitably growing company and our confidence in the future.”

“Building a strong balance sheet that supports our growth plans remains a core part of our One Ford strategy,” said Lewis Booth, Ford executive vice president and chief financial officer. “We have demonstrated our capability to finance our plans and we are confident that we can begin to pay a dividend that will be sustainable through economic cycles.”

Ford has financially been ahead of the curve ever since the 2008 financial meltdown, when it did not request bailout funds from the Government, while Chrysler and GM were on their knees. To a certain extent Ford can attribute this sour point in the American car buying public's mind, to it's success. As many polls suggest people will not buy Chrysler or GM vehicles, due to the fact they received bailout money.

Additionally Ford has done a tremendous job of bringing to market great vehicles across the board, from small cars to large trucks. It has made a real effort in the small car segment, which is seen as key to being competitive in today's market, and an area which the US automakers are considered to be behind in. The new Ford Fiesta and Ford Focus, both nicely styled small cars, have been sales successes. This most likely has only strengthened Ford's image.

GM has also failed to rebrand itself as successfully as Ford has. While it has tried to introduce appealing small car models, it has failed quite miserably.

Ford still has a bit of an uphill battle too, since foreign competition is strong. Ford still might not look appealing to most investors since Moody's and Standard & Poor's have kept Ford at a 'non-investment' grade rating since 2005. (Keep in mind these are the same people who rated sub-prime mortgages as a great investment!)

This is an important milestone for Ford and the US auto industry as a whole. Could this be a sign that car sales might be turning around, as well as this horrendous economy? Only time will tell, but at least at Ford things are starting to look better.