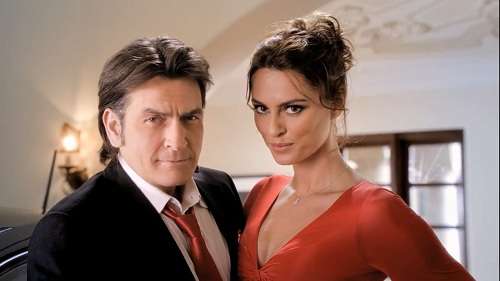 Charlie Sheen, the somewhat controversial actor, will be back on TV appearing in the new Fiat 500 Abarth commercial.
Advertisement

Following the success of the Fiat 500 Abarth commercial for Super Bowl 46 (New England Patriots and New York Giants), Fiat is going to start airing this new commercial on TV. It has been posted on Fiat USA's Youtube channel, but has not yet aired. It seems Fiat wants to create social media buzz before the commercial airs.

The commercial is entitled “House Arrest” and starts off showing an idyllic Hollywood mansion. The camera cuts inside and you see there is a party going on. Rock music plays in the background and then you start seeing the Fiat 500 Abarth driving around the house. It's so fast it is just a blur! It even leaves smoke behind as it goes by and cracks the windows.

The car comes screeching into the main living room and everyone is cheering. Charlie Sheen steps out of the car with an ankle bracelet on. He looks at the camera and says, “I love being under house arrest!” Catrinel Menghia, the Romanian model, who appears in the original Fiat 500 Abarth commercial, comes over to Charlie Sheen and puts her arm on his shoulder. He looks at her and says, “What do I get for good behavior?” Catrinel Menghia smiles and then they both look at the camera.

Another sequence of the Fiat Abath 500 shows it going around the house again. Over the sounds of the same pulsing rock music words appear as if from a movie trailer, “Not all bad boys – are created equal!” In Mr. Sheen's case, I think we can safely say this is probably true.

Charlie Sheen is probably best known recently for his sexual exploits and getting kicked off the CBS television show “Two and a Half Men!” It seems Fiat hopes to capitalize on his bad boy image and the media buzz around Sheen. Is this a smart move by Fiat?

The Fiat 500 Abarth commercial from the Super Bowl currently has over 8 million views and counting. It will be interesting to see how popular this new commercial will be. I think with Charlie Sheen, who seems to always stir the pot, and the beautiful Catrinel Menghia again, it should be a hit.

Adam Yamada-Hanff wrote on March 1, 2012 - 3:52pm Permalink
Thank You Fiat for including Catrinel Menghia in this commercial too. We definitely want to see more of her!