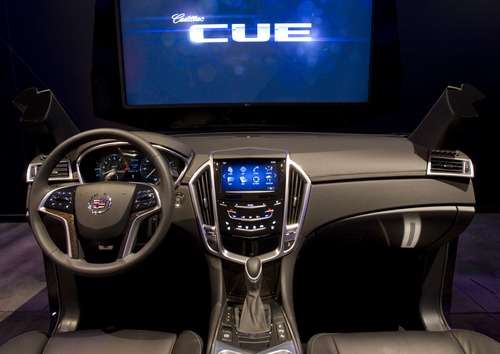 It is Cadillac's comprehensive in-vehicle experience that merges intuitive design with auto industry-first controls and commands for information and entertainment data. It will help consumers have a more connected driving experience.

The CUE system will begin rolling out on 2012 Cadillac vehicles, such as the Cadillac XTS and ATS luxury sedans and SRX luxury crossover. CUE is designed to be unique for each driver, from the “simple user” to the fully connected “super user.”

“For the tech-savvy, it’s everything you want it to be – a full suite of infotainment, navigation and communication tools that keeps you fully connected. For the tech-averse, its power is remarkably simple, intuitive and accessible,” Butler said.

CUE will pair entertainment and information data from up to 10 Bluetooth-enabled mobile devices, USBs, SD cards and MP3 players with a vehicle infotainment system. This will reduce complexity and confusion through natural voice commands, customized information, and fewer buttons and larger icons.

For example, the majority of luxury vehicles on the market have around 20 buttons controlling the radio and entertainment functions, while CUE has only four buttons.

CUE is operated from a 8-inch LCD touch screen. The vibrant LCD screen displays CUE’s home page, which resembles a smart phone’s screen by using large easy to see icons to control commands and functions. The screen seamlessly integrated into the top of the central instrument panel, and a motorized fully capacitive faceplate at the bottom conceals a large storage area.

CUE’s LCD screen is smartly setup. The driver’s five most frequently used functions are stored along the top of the screen. At the bottom of the screen, drivers can select up to 60 favorites from music to points of interest, addresses, maps for weather or directions, phone numbers or various system commands. Favorites can also be re-ordered and named to be easily recallable.

The steering wheel is also apart of the system. It contains a five-way controller on the left and right side. The right side navigates the cluster display, a volume control and buttons to cycle through favorites. The left side manages cruise control, voice recognition, phone hang-up.

“CUE doesn’t replace your smartphone or your iPod,” said Micky Bly, executive director, Global Electric Systems, Infotainment and Electrification. “Rather it allows consumers to securely store those mobile devices while channeling the information on those devices, along with your navigation tools, weather maps with Doppler radar, AM/FM and XM radio, instant messages and emails, through a central portal in your Cadillac, keeping hands on the wheel and eyes on the road.”

To improve simplicity and connectivity for consumers, CUE will feature several auto industry-firsts which include:

Proximity Sensing: As a user’s hand approaches the LCD screen, command icons appear. Icons can be arranged by consumers to improve ease of use.

Haptic Feedback: Buttons on the fully capacitive faceplate pulse when pressed to acknowledge the driver’s commands and helps keep the driver’s eyes on the road.

Car guy wrote on October 17, 2011 - 9:39am Permalink
Cadillac XTS will come to dealerships in the spring of 2012. What's interesting in this is that Cadillac is trying to use an unconventional marketing strategy to lure buyers to its upcoming XTS sedan, with plans to market it to limo services as a livery vehicle or “black car”.