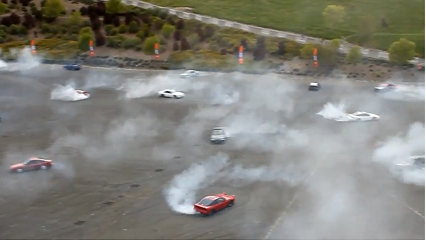 If you like seeing cars doing donuts, or possibly doing them yourself in cars, then you will probably be happy to hear the World Record for “Most Cars Performing Donuts Simultaneously” has just been broken.
Advertisement

That's right 75 cars and drivers set the Guinness World Record for the most number of cars doing donuts simultaneously at one location at the same on March 20th, 2012. The donut mayhem took place at Infineon Raceway in Sonoma, CA.

Infineon Raceway was an ideal location to hold this event, as the organizers used a 240,000-square-foot section of the raceway's paddock area to break the world record. The donut extravaganza lasted for around 40 seconds.

The paddock could probably have held more than 75 cars, but that was a number organizers “felt comfortable with,” said Jennifer Imbimbo, the Infineon Raceway's communications manager in quote on the San Fransico Gate Chronicle Blog.

If you watch the one of the many videos on Youtube of the event, for awhile there is so much smoke, you can't even see what is going on . When all the cars stop it is amazing to see how many tire marks are left on the pavement. Hopefully the damage to Infineon Raceway's paddock isn't too bad.

Of course the track is used to seeing it's far share of abuse. Every week there are events were drivers can practice drifting their vehicles and other tricks in the safety of an open space, and not on the street.

The organizers of the this Donut world record still have to send documentation to the Guinness World Record organization for verification. With the massive amount of Youtube videos of the Infineon Raceway donut breaking World Record, I don't think they should have a problem.

Recently another car world record was broken by Mads Østberg, a Norwegian World Rally Championship driver. He broke the world record for “Longest Car Jump In Snow” for flying 50 meters over the snow, which is about 164 feet, in his WRC Ford Fiesta Rally Car.

According to the the Guiness World Records website this breaks the previous world record for “Most cars performing donuts simultaneously” which was set back in 2010 (January 23rd) and at the Queensland Raceway in Willowbank, Australia. There were 57 car and drivers that were recorded. There were actually 66 cars were at the start, but 9 had to be deducted because they did not perform donuts for the required full ten seconds.

Elon Makes a Cybertruck Statement With an Action, But Quiet in Words
Tesla's Record Month in China: Doubled Registrations in March 2021
END_OF_DOCUMENT_TOKEN_TO_BE_REPLACED