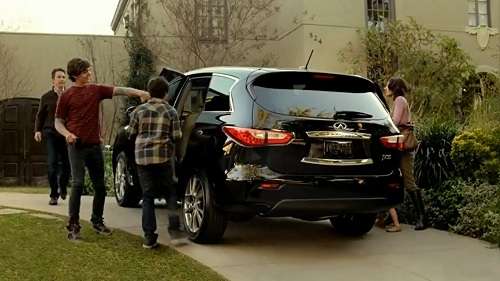 Infiniti will be launching the new 2013 Infiniti JX SUV across the country this month and will be tying in the launch with the three television spots to air for the NCAA (National Collegiate Athletic Association) March Madness Selection Sunday.
Advertisement

The 2013 Infiniti JX (hey, it's still 2012 you know!) is Infiniti's vehicle for the large SUV segment. The 2013 Infiniti JX will feature many advanced technologies and Infiniti is showcasing that in these commercials. For instance obstacles behind the vehicle, which the JX Backup Collision Intervention System will detect and, if necessary, automatically engage the brakes to help avoid a collision with a pedestrian behind you. This is the world’s first Backup Collision Intervention System. Another handy feature on the XJ is Infiniti Personal Assistant, Infiniti’s live 24-hour personal concierge service, which can provide driving directions and other questions are easily answerable through the service.

The JX will also be the first 7-seater for the luxury brand. Passengers entry into the 3rd row is surprisingly easy in the Infiniti JX since it has wide door openings and a unique forward movement function of the 2nd row.

The new Infiniti JX spots “We Choose,” “Interior,” “Dog House,” and “See the Invisible,” shows a stylish family encountering common everyday situations. All television spots have already been posted to Infiniti's Youtube channel. (You can watch them below too.)

The televisions spots are set to debut on NCAA Selection Sunday, which is tonight, on CBS. (Selection Sunday is when the NCAA determines which 68 Division 1 teams will enter the tournaments and their seedings and matchups in the knockout bracket for the Basketball Championship.) The spots will continue to run throughout what is commonly know as March Madness, including the Men’s Final Four and NCAA Basketball Championship Game.

"The inspiration that is NCAA March Madness and the passion surrounding the games provides the right platform to share our story about the all-new Infiniti JX with passionate fans,” said Infiniti Americas Vice President Ben Poore. “These spots showcase how our vehicle stands out from the crowd with the bold design, luxurious versatility and advanced hospitality and safety features.”

Infiniti will also be showcasing these spots at the 2012 Amelia Island Concours d’Elegance which took place over the weekend. Infiniti proudly sponsors the Infiniti Media Room and Judges’ Lunch. Another major sporting event Infinit will be sponsoring this Summer is the 2012 Olympic Games which will take place in London.