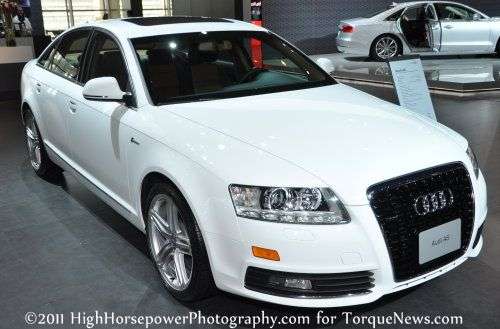 A new ad campaign from Audi of America for the 2012 Audi A6 starts this month. The campaign is a call to make America’s roads a more intelligent place. It will appear in print, broadcast and online, with :30, :60 national and cable television spots, print ads in national newspapers and in automotive magazines and online.
Advertisement

The campaign calls attention to the fact that 38 million drivers who are on the road today would not pass their state’s driver’s exam according to a study conducted by the Illinois Public Interest Research Group. It notes that drivers encounter over 100,000 miles of crumbling highways and bridges. And it calls attention to the fact that at least one third of drivers under the age of 30 are texting while driving.

The decay of our nation’s infrastructure was cited in President Obama’s speech that he delivered to Congress last week. The U.S. Secretary of Transportation, Ray LaHood has called for legislation and enforcement of laws that ban texting while driving.

The Audi A6 campaign’s mission to make the roads a more intelligent place calls attention to these issues. The ads position the 2012 Audi A6 as a capable vehicle able to overcome the obstacles presented on today’s roads while enhancing driver safety and enjoyment.

The 2012 A6 is one of Audi’s most innovative and technologically advanced models to day. New safety features include a thermal imaging camera with Night Vision Assistant to highlight pedestrians it detects in front of a vehicle as well as the Audi Pre-Sense Plus safety system that can minimize accidents by warning the driver and applying brakes with increasing force in an emergency. The A6 is equipped with head-up display that allows the driver to see important driving information in real time without taking the driver’s eyes off the road.

Audi has also partnered with the SENSEable City Lab to develop the Road Frustration Index (RFI). The RFI features real-time snapshots of America’s roads, taking into account traffic patterns, infrastructure quality, weather patterns, driver behavior, social media comments about driving and more. The data is measured, weighted and compiled into an overall “Index” for major cities throughout America. Individuals will be able to find the RFI for their community and compare it to that of their friends. To view the RFI, visit www.roadintel.com

Audi is the first company to incorporate Google Earth into its navigation system. It also features a touch pad that recognizes handwriting in multiple languages, allowing drivers to perform a number of functions without taking their eyes off the road, as well as factory-installed wireless internet, enabling features such as Audi connect™ for real-time weather, traffic, news and live fuel prices.