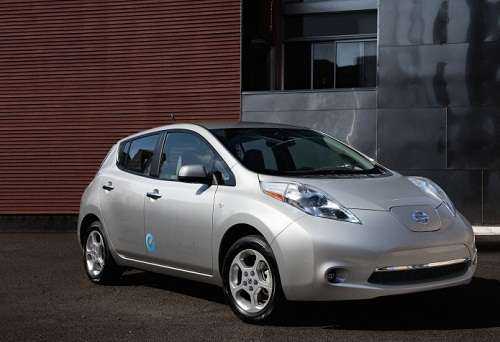 Normal electric vehicle batteries were costing in the thousands of dollars to replace after approximately five years of usage. Nissan is saying that their battery packs in the Leaf EV will only cost in the hundreds to replace.

The Japanese auto maker thinks most Nissan Leaf automobile owners who drive their cars for about five years at approximately 12,000 miles per year, which is an average number of miles for most, will still be happy with their cars. Why? Because their Leaf batteries will still have a life in the eighty percent range after all that time.

Since many believe that electric vehicles are difficult to sell as used cars because consumers are concerned about the used batteries in the cars, plus new technology coming out, Nissan claims that in a Leaf owner being able to keep their car longer, this will be extremely positive. There has been debate that selling a used Leaf may not be an easy thing to do.

Simon Sproule, the CVP Nissan global marketing communications made this statement: “There’s been a lot of debate online about the replacement cost of the battery and it’s very unlikely that anyone’s going to have to replace the entire battery pack. Typically people will need to replace modules and we can open up the battery pack and do that. There’s been a lot of chatter online about tens of thousands of dollars or euros to replace a whole battery pack, but really you want to focus on the modules and these will be in the hundreds, not the thousands.”

Sproule also spoke about the lack of charging infrastructure to support the electric vehicle market. He made only a quick mention of those who may drive their cars much more than 12,000 miles a year. Some drivers may drive much more, requiring the battery to need more frequent or even daily charging. This, of course, would drain the battery much more quickly.

Sproule made this statement: “If someone uses the fast charging system every day, they would be doing more than 200 miles and on an annual basis that would be over 70,000 miles. There aren’t many people that drive 72,000 miles a year in any car so it’s an unlikely scenario that someone would be fast charging every day. The constant heavy recharge cycle is the extreme and we engineer for the extreme but the reality day-to-day will be nowhere near that.”