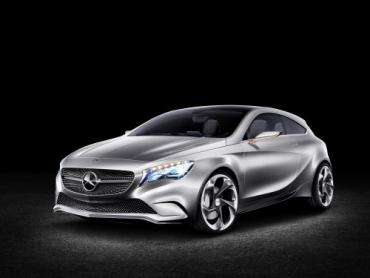 Mercedes-Benz is taking its extraordinary Concept A-CLASS model on tour for the world to see. The breathtaking vehicle has already been to a major motor show on two different continents and is now on its way to show its presence in the United Kingdom.
Advertisement

The Mercedes-Benz Concept A-CLASS will be shown encased in a mirrored cube, surrounded by pillars of colored LED lighting. This kind of lighting changes color, revealing the contents inside the casing for those who pass by to see. Quite a spectacle the Mercedes will make when it is shown this way in the U.K. This spectacle has been called one of the most dramatic and intriguing automotive displays ever seen in the UK

From September 13-16, the vehicle attracted many Mercedes-Benz enthusiasts and is now getting ready for its national tour. It plans to show its elegant beauty in four different major cities.

Enthusiasts will also get a chance to see the Concept A-CLASS out on the roads if they are lucky to pass by the vehicle as it is being transported from one location to another. It will be encased for all to see in a purpose built glazed truck.

Mercedes-Benz describes their new Concept A-CLASS as being stunning from every angle and a groundbreaking new concept car from the brand. Their website, www2.mercedes-benz.co.uk verbally illustrates their car as having a low roofline and athletic stance. The exterior styling is full of expression and energy and it has positive and negative surfaces that are defined by crisp, dynamic lines. The radiator grille, made from inverted mesh creates a 3-D pin effect and is intricate and ornate, almost jewelry-like, according to its makers.

Some other details of the vehicle as described by the brand itself are distinctive wing-shaped LED headlights and side mirrors, and a large panoramic glass roof. Inside the car, the striking cabin design looks much like an airplane with an illuminated dashboard and jet engine style air vents. As for technology, an iPad like, large-display multimedia system offering Facebook, Twitter and other apps is one of many innovative features for sharing on the move, according to Mercedes.