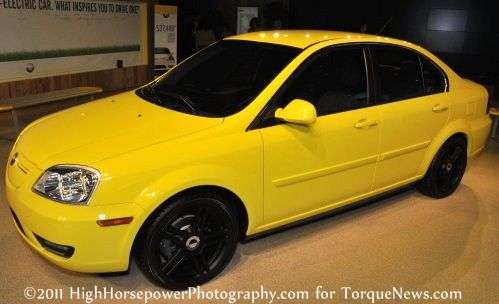 Electric vehicles sales are slowly increasing; however, EVs are not inexpensive and companies are fighting to help make them more affordable and practical for consumers. Yet the auto makers stay optimistic, according to the Bedford Report.
Advertisement

With the high price of oil, shooting up gas prices all over the country, and the change in the way the world is trying to stay environmentally friendly, electrical cars are gaining more and more popularity. Companies of all different car brands are seemingly feeling optimist about their car sales and seem to be increasing their amount of electrical car manufacturing. Automobile companies are holding onto high hopes that they will be seeing more and more electrical cars on the roads until they virtually take over the conventional car.

The current automobile market is also pushing manufacturers in the direction of developing smaller cars. The United States economy, which is still struggling from the global financial crisis, is still trying to recover and many European countries are facing the same issues. That means that car buying is not what it used to be either as consumers are not wanting or able to spend money on vehicles lie they used to want to or were able to do. The electrical car, which is usually smaller than the conventional car, tends to help in that realm.

While car sellers are trying to remain optimism that electric vehicles will do well in sales, they are in fact, struggling to compete with conventional automobiles. This is due to the fact that not all electrical vehicles are inexpensive. The cost of buying and maintaining an electrical car is not that cheap.

A study published today by the Low Carbon Vehicle Partnership (LowCVP) reported that “the total cost of electric and hydrogen cars may remain higher than petrol and diesel vehicles until 2025 or 2030, even if incentives continue and significant investment in supporting infrastructure is delivered.”

The Bedford Report helps consumers by sharing market research on the Auto Manufacturing industry so investors can stay up-to-date on all the latest information and make the best investment decisions to maximize their returns.

Lastly, Tesla Motors, located in Palo Alto, California has made its goal to help expedite the world’s transition from the conventional car to the electric vehicle with a large selection of increasingly affordable electric cars. Hopefully, electric vehicles makers all over will find ways to decrease the sales prices of their electric cars to help save consumers money and to also help the environment. A special attention and prominence will be given to electric cars at the 2011 Frankfurt Auto Show.

robrivets wrote on September 10, 2011 - 1:56pm Permalink
What is the true cost of oil? The billions we spend each decade on wars to preserve our supply? The spills and global warming destroying our environment? Our dependency on countries that are not exactly US friendly? The study is short sighted.