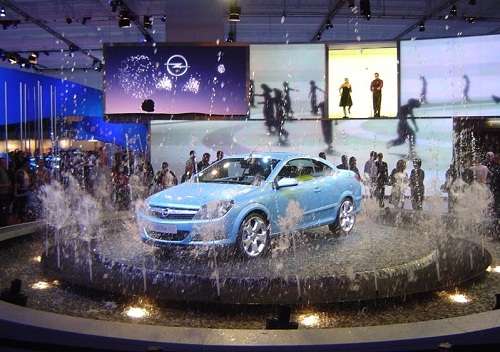 Frankfurt Motor Show to showcase electric cars: The wave of the future

The 2011 64th International Motor Show in Frankfurt, being held from September 15-25, 2011 will be showcasing some of the finest, most elite automobiles, including the electric car. Electric vehicles (EV) will be on the front lines at the show due to their increasing popularity.
Advertisement

The 2011 Frankfurt Auto Show will be premiering the newest electric cars from many different brands. The show is expected to debut approximately eighty-nine models and an approximate total of 1,007 automobiles. Auto parts will be showcased as well.

The creative and catchy slogan of the 2011 64th International Motor Show in Frankfurt is: "Future comes as standard." Of course this will speak for how this year will be pushing the sales of environmentally friendly, small electric cars.

BMW will be introducing its new i3 concept. This BMW i3 is the first electric car for “city slickers”. It is expected to go into massive production in 2013. This vehicle will be a highlight for sure, at the 64th International Motor Show in Frankfurt next week.

Another great brand, Volkswagen will present its new electric compact, the UP!, at the Frankfurt show as well. It will also be showcasing its single-seat Nils, which is another electric vehicle designed more for “urban residents”.

Next, Audi will be introducing their small electric car, the Urban with a unique exterior. Another Audi model that will grace the 2011 Frankfurt Motor Show will be the Audi’s new A2 electric concept which is scheduled to be released in 2015 for the first time.

Mercedes Benz will make an appearance at the show to impress guests with five of their new model cars. On display will be the Mercedes new B Class Benz and the high-end F125 electric car. Mercedes will also introduce their more sporty models, such as the SLS AMG, SLK 250 CDI and SLK55 AMG.

Toyota will have a presence at the 2011 Frankfurt Motor show as it introduces its new versions of its Avensis, Prius and Lexus 450h. The new Lexus GS450h has been transformed into an environmentally friendly hybrid, which Toyota wishes to showcase.

Hyundai-Kia will introduce the i30, a medium-sized hatchback, the i40 and the BlueOn electric car.

The 2011 64th International Motor Show in Frankfurt has all these new electric cars and hybrids to show-off many car makers as attempting to become the future of environmentally friendly production companies. Eco-friendly automobiles are the future and Frankfurt is where the world will be introduced to the newest, latest and greatest in EVs.

Honda Accord Atlanta wrote on September 9, 2011 - 2:29pm Permalink
Wow, I like the waterfall around the car at the auto show; it looks very "epic". Electric cars are cool but I hope that many of these new EV's will have more mileage or a wider range that can be traveled before they can be refueled. Also, not everyone can have a charging station installed because many people live in apartments or high rises and we gotta park on the street.

Tesla-Funded Research Reveals One of The Biggest Mysteries of EV Battery
Tesla Tesla Buyer Nets a Whopping $12,000 Discount After Asking for Reduction
END_OF_DOCUMENT_TOKEN_TO_BE_REPLACED