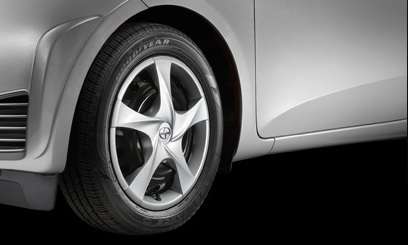 The Toyota Scion brand and the Goodyear Tire & Rubber Company are teaming up to introduce all new sleek 2012 Scion iQ equipped with the superior performing Goodyear tire. Scion will sport the popular Goodyear fuel-efficient tire for its new 2012 model coming to showrooms in October.
Advertisement

This standard and exclusive tire made to fit all new 2012 Scion iQ vehicles will be Goodyear's Assurance Fuel Max tires in size P175/60R16. This is the perfect tire to fit the micro-subcompact 2012 Scion iQ car.

The 2012 Scion iQ is only 10 feet in length, yet it can seat four people comfortably. The Scion iQ has been called the world's smallest four-seater to date. The automobile will be hitting Toyota showrooms before the year is over and car shoppers will love all the Scion iQ has to offer, including its price. The automatic Scion iQ will start with a sticker price of $15,995 MSRP with an estimated MPG of 36 city and 37 highway.

Scion is a brand of vehicles manufactured by the Toyota Motor Corporation in 2002. It was originally produced for the North American market, but made a nationwide launch in 2004. The Scion’s models began with the Scion xA hatchback (2003-2006), Scion xB wagon 2003-current, Second generation Scion tC 3-door liftback (2004-current), second-generation xB, a 5-door box-shaped compact wagon, Scion xD a 5 door-subcompact car (2007-current), and the Scion iQ early 2011-present.

The Goodyear Tire & Rubber Company is one of the world's largest tire companies, employing approximately 73,000 people. It produces its products in 54 facilities in 22 countries around the world. Many brands of automobiles come with Goodyear tires as their original tires from the manufacturer. Some of these cars include Acura, Audi, Cadillac, Chevrolet, Dodge, Ford, GMC, Infiniti, Isuzu, Jeep, Land Rover, Lexus, Mazda, Nissan and Toyota. The Goodyear tire has been said to be the most popular tire for vehicles in North America.

Toyota Scion announced that their brand new 2012 Scion iQ will have an EPA-estimated 37 miles per gallon combined fuel economy and the Goodyear’s Assurance Fuel Max tires will only improve the Scion’s performance. A press release shared that, “The Assurance Fuel Max features a fuel-saving tread compound that helps reduce energy loss as the tire rolls. In addition, Wet and Dry Tread Zones enhance all-season traction. The Wet Tread Zone features dual Aquachannel grooves to help evacuate water away from the treadface when driving on wet roads. The Dry Tread Zone helps enhance handling and grip for confident maneuvering on dry pavement.”

Dan Tole wrote on September 12, 2011 - 4:09pm Permalink
It makes sense for these companies to form a partnership. They both offer quality products and can leverage the partnership for marketing purposes.