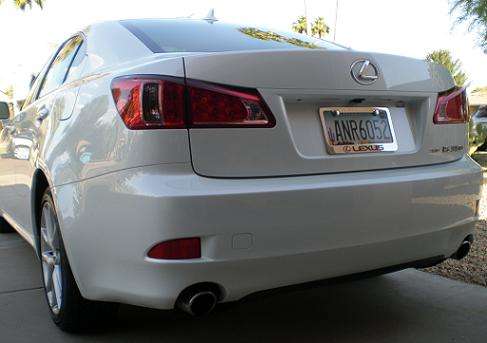 This BMW fighter is pulling its punches as a purist sports sedan, but as a blend of sport and luxury the 2011Lexus IS 350 AWD is a knockout, which might disappoint the hard-core enthusiast but will amaze everybody else.
Advertisement

The 2011 Lexus IS 350 AWD delicately blends crisp handling and smooth ride, power and precision and adds huge doses of class, style and technology.

The first Lexus IS we drove at the 2000 launch of the then new line in Austin, Texas was rougher in the sense that it was more sport with touches of attitude, namely the ruggedly handsome and arty designed watch works instrument cluster that set off the initial product as a sports sedan, even though it didn’t even offer a manual transmission.

But times change, and so did the IS. It grew from that first attempt we saw in Austin into a larger, more refined and much more powerful offering that will shove your backbone into the seatback.
Under the hood sits a 3.5-liter DOHC V6 with 24 valves and duel VVT-i producing 306 crazy horses and a brute 277 pound feet of torque capable of 0-60 in less than 6 seconds. As good as that sounds, the acceleration feels even better.

And another thing that really matters happens when you nail the accelerator. That engine, like a wild animal, growls with a meaty baritone. So nice. At 65 mph the tack reads 2100 rpm in sixth gear, still in the torque band.

Behind the engine is another reward, the electronically controlled with intelligence (ECT-i) transmission. Let’s not be so technical. When it shifts, this thing feels like a manual. There’s a pronounced and slight delay in gear changes even in automatic mode. Slide the gearshift into manual mode and place your thumbs on the steering wheel mounted paddle shifters and those shifts respond like your shoving in the clutch and grabbin’ a gear.

Handling is a delicate balance. While body roll is minimal, the IS 350 AWD just doesn’t have a racecar or even sportscar feel, that’s not what this ride is about, but it is sure footed. We threw it into a 90-degree turn at a decent clip and the Dunlaps felt like they rolled under but they didn’t squeal. We found a rough road and the ride remained quite pleasant, both firm and pliant. Road feel in the steering wheel was somewhat muted, though. We could turn the wheel a few degrees and we still went straight. By the way, our passenger was annoyed by the noise those Dunlaps made.

Slam the brakes and you’d better be strapped in or you’ll go sliding off the leather seating. Vented four wheel disc, anti-lock with Electronic Brakeforce Distribution and Brake Assist and Smart Stop Technology make stopping one of this car’s performance high points, and the pedal feels rock solid.

While the perforated leather seats feel firm and supportive, we feel like there was a hole where the seatback meets the seat and that was bothersome in the position we needed to set. We’ve noticed that on other cars, too, so maybe that’s just us.

The 2011 Lexus IS 350 AWD is quite a bit larger than the IS we tested in Austin and that is most noticeable in rear seat leg room, which borders on generous unless you’ve got basketball players up front.

For the technology minded, the IS 350 is fitted for Bluetooth, has a USB audio plug and Satellite radio, and a premium audio system with an in-dash 6-disc CD changer and 13 speakers.
Lexus being Lexus, the IS 350 AWD has a long list of luxury items ― from the automatic up-and-down electric windows and sun roof, and the rear-facing camera to see what you’re about to hit in reverse, to the tilt and telescoping steering wheel, heated mirrors, heated and vented front seats two-way power lumbar, rear window shade, headlamp washer and on and on. Here in Arizona the rear window shade is just what we need and it does a nice job of limiting glaring headlines behind.

EPA estimates mileage at 18 city and 25 highway, livable to the heavy-footed enthusiast, but don’t tell the penny-pinching spouse looking at $4.10 and climbing on the pumps.
The loaded IS 350 AWD we drove for a week stickered at $44,952, plus $875 delivery and handling charges, totaling $45,827.