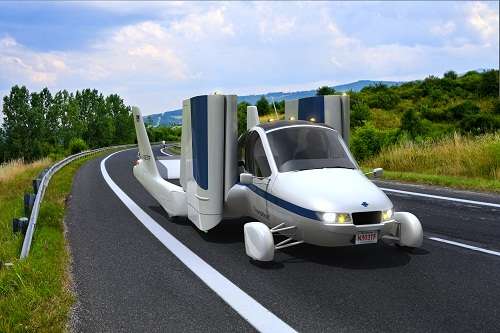 The NHTSA granted Terrafugia, Inc., a small Massachusetts company, all of the exceptions the company needs to begin delivering its flying car once a rigorous certification testing program is complete.

Terrafugia’s Transition® Roadable Aircraft, as it’s named, is the first “flying car” to receive special consideration from the Department of Transportation since the Federal Motor Vehicle Safety Standards became law in the 1970s.

Extensive analysis and simulated crash testing are also being conducted with Terrafugia’s industry partners to ensure that the Transition® meets all other applicable crash safety standards.

“The Transition® is the only light airplane to have undergone this high level of crash safety design and analysis. It is also the first to incorporate automotive safety features such as a purpose-built energy absorbing crumple zone, a rigid carbon fiber occupant safety cage, and automotive-style driver and passenger airbags,” the company said.

The exemptions allow Transition® to use tires rated for highway speeds and the vehicle weight but are not ordinarily allowable for multi-purpose vehicles. The same tires were used successfully on the Transition® Proof of Concept that was flight and drive tested in 2009.

Because the traditional laminated automotive safety glass would add significant weight to the flying car and could fracture in such a way as to obscure the vision of the pilot in the event of a bird hits it.

So, an exemption allows the use of polycarbonate materials that provide comparable protection to the occupants at significant weight-saving without shattering or crazing – improving the safety of the Transition®.

In issuing the exemptions, the NHTSA stated that “we further conclude that the granting of an exemption from these requirements would be in the public interest and consistent with the objectives of traffic safety.”

In 2010, the Transition® was granted an additional 110 pounds allowance by the Federal Aviation Administration (FAA) in a prior exemption action by the DOT.

The Transition® can take off or land at any public use general aviation airport with at least 2,500' of runway. This represents the majority of the over 5,000 public airports in the United States. On average, you're within 30 miles or less of one of these fields anywhere in the country. On the ground, the Transition® can be driven on any road and parked in a standard parking space or household garage.

Since it will be certified as a Light Sport Aircraft, the Transition® will require at least a Sport Pilot license to fly, which requires a minimum of 20 hours of flight time and passing a simple practical test in the aircraft.

The first delivery is scheduled for late 2012. So far about 100 aircraft have been reserved, representing an order backlog of over $25 million. The final purchase price has not been set. We are currently in the process of updating our cost estimates. We expect it will be around $250,000.

Terrafugia, Latin for "escape from land, is a small aerospace company founded by pilot/engineers from MIT and supported by a world-class network of advisors and private investors. Terrafugia’s mission is the innovative expansion of personal mobility.

LG's New EV Battery Plant Is a Welcome News for Tesla
Tesla Giga Berlin's New Hurdle: It's Not Only the Gov't, but Now Tesla Itself
END_OF_DOCUMENT_TOKEN_TO_BE_REPLACED