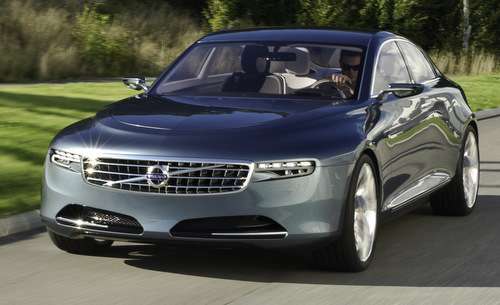 Volvo has taken the wraps off the Concept You, a four-door coupe design exercise that showcases the Swedish automaker's interest in smart technology integration and a new family of four-cylinder engines.
Advertisement

Volvo unveiled the Concept You at Frankfurt Motor Show this morning, a four-door pillarless sports coupe that is rumored to be the basis for upcoming large and midsize cars from the Swedish automaker. It is an evolution of the Concept Universe, which was revealed at Shanghai earlier this year. The roof extends back to the absolute end of the car, "creating that dynamic fastback look that is very much in vogue among European car buyers at the moment," according to Volvo vice president of design Peter Horbury.

The Volvo Concept You will have technology similar to smart phones and smart tablets, that according to Horbury, "makes the owners' manual a thing of the past." In the place of the vast array of buttons normally found on today's cars will be touch-screens, that aim to streamline the commands given to the car via the passengers and reduce cluttered dashboards. The driver will have his or her own Driver Information Monitor as well as a heads-up display that reflects off the windshield. The dashboard will have a touch-screen for the front passenger, and the rear passengers will have a touch-screen in between the two bucket seats. That means that the Volvo Concept You is just a four-seater, but those four passengers will have plenty of room, with frameless seats that attach to the sides of the center console. Even the aluminum and wood steering wheel will have touch screens for controls like cruise control. The Volvo Concept You features an infotainment system made by Alpine that features what's called a "FreshAir" subwoofer, a prototype subwoofer that uses the ambient air surrounding the car to enhance the listening experience.

Volvo has also teamed up with severel venerated Swedish interior design brands that capture the Scandinavian lifestyle for the car's various interior surfaces, like hand-tufted carpets from world-famous Kasthall, and the fabric on the seat backs and the door panels is Italian, but the design comes from Swedish fashion house Oscar Jacobson. The seat bottoms are upholstered in Dinamica suede from Bridge of Wear, as is the headliner. Walnut and aluminum also make luxurious appearances on various trim pieces around the interior.