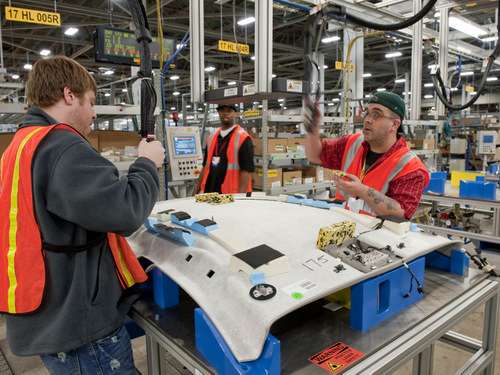 The UAW parts supplier LINC Logistics Co. is fighting for a wage increase at GM's Orion plant in Detroit, where production of the Chevrolet Sonic subcompact will commence in August.
Advertisement

Workers at the General Motors Orion assembly plant in Detroit have taken a vote to authorize a strike in hopes of pushing contract negotiations with the UAW. The Orion plant is where the upcoming Chevrolet Sonic subcompact and the Opel-based Buick Verano compact sedan will be manufactured. The workers are employed by LINC Logistics Co.

The United Auto Workers, who convinced the LINC workers to join the union by the card check process in spring 2011, has been unable to come to terms with the 125 LINC workers that have signed the strike authorization. Pat Sweeney, president of UAW Local 5960, which represents LINC, says the UAW is fighting for a 'living wage.' At $10 an hour, a LINC worker would earn $20,800 before taxes, below the federal poverty line for a family of four.

A strike authorization would give the UAW the right to strike on LINC's behalf after a short waiting period. However, the UAW wants to resolve the issue before the plant reaches full production, at which point the number of LINC employees could double. "We want to get these negotiations behind us and launch this great product," Sweeney said.

Production of the Chevrolet Sonic begins in August, and GM spokeswoman Kim Carpenter said that the strike-authorization vote and UAW negotiations with LINC are not expected to delay the Sonic's launch date. Furthermore, it's unclear how many, if any, UAW workers would be willing to cross a picket line if the strike is actually called. The Sonic will be the only US-built subcompact car once it goes on sale.