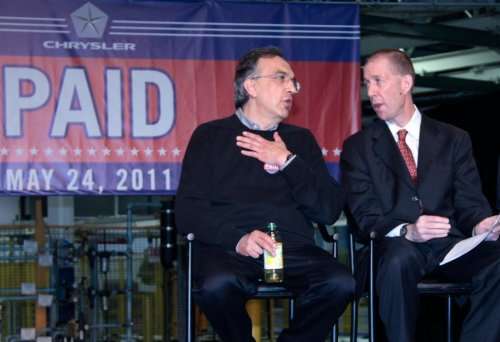 Taxpayers to Lose $14B in Auto Bailout Funds

The Obama Administration reported Chrysler has repaid all of its loans, and General Motors has paid back approximately half.
Advertisement

Ron Bloom, The Obama Administration’s Assistant for Manufacturing Policy, reported yesterday on the status of the auto industry bailouts from two years ago. To date Chrysler has repaid all of its loans, and General Motors has paid back approximately half.

Bloom provided more detail: “The total funds invested, including the prior administration, into the industry is roughly $80 billion. Roughly $40 billion has been returned to date. The remaining money is accounted for by stakes in General Motors -- we’ve sold about half of what we own, but we still own the other half -- a small equity stake in Chrysler; and a stake in Ally Financial, which is the old General Motors Acceptance Corporation.”

The Congressional Budget Office’s latest estimate of the stock value indicates that out of the initial $80B, a $14B loss is expected. That figure rises when the value of the stocks decline. The Treasury Department reported that figure at $13.9B based on a March 31 stock price of $31.03. The Administration won’t announce when it plans to sell the stock for fear of disrupting prices, and won’t commit to selling at a target price.

When pressed further, Bloom stated that he doesn’t expect all of the money to be returned.

Bloom highlighted that all three US automakers have gained market share last year and are making profits. He admits some of this is due to recent troubles with the Japanese manufacturers, but clams most of the gains are due to “making better, fuel-efficient cars” that consumers want, and touted the Chevy Cruze, Ford Focus, and Chevy Volt as examples.

General Motors reported in April that the total sales of the Volt since it’s introduction in late 2010 was 2,029 units, ahead of the 1,044 sales of the competing Nissan Leaf. The Volt is a compact hatchback with a retail price of $40,280 and is only sold in select markets.

Anonymous wrote on June 2, 2011 - 2:50pm Permalink
So, that means that 58%, of the Population(310 million) of the USA, that works,each worker gave Obama's Union backers ,roughly $70.00 for helping elect Obama.
Anonymous wrote on June 2, 2011 - 6:11pm Permalink
this just goes to show just how stupid some people are in the US because they buy these vehicles .they [gov] give them all this money after listening to how their going to build better more fuel efficent cars and how their going to pay this money back with interest. then gm makes a comercial saying we've paid the money back only to find out they just used other bailout money to pay back bailout money inorder to barrow more money and leave the tax payers holding the bag for all of it and to top it off the first comercial for a new car was a supercharged corvette & cadillac & then a camaro [14mpg]. can you say gas guzzlers then came the cruze [lol] soon to be called the bruze with three recalls allready shoot i heard the volt even failed emissions in california [for gods sake its an electric car gm. ] i ask is this what we should expect for our tax money a car company that laughs in the face of our goverment and ours. i dont think so. SUPPORT AMERICAN TAX PAYERS [FORD] DRIVE ONE ENGINEERED BUILT & RACED WITHOUT YOUR TAX DOLLARS oh yea the earthquake in japan stopped production of some chevy trucks in the us for lack of parts. can you say american bailout tax dollars helping japans economy