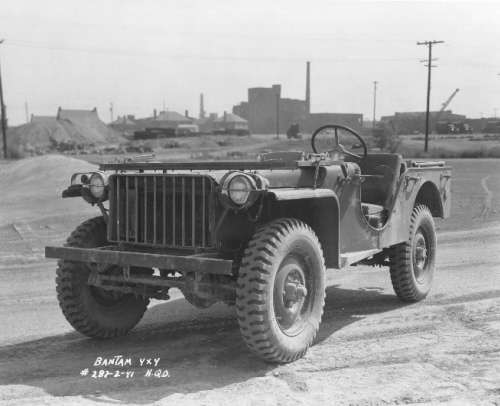 Who designed and built the first Jeeps?

This man was a chief engineer for General Motors. He quit, bought the Maxwell automobile works and changed the car name to his own.
Advertisement

2. The German automaker Daimler named a car for the daughter of one of his employees. The girl’s name?

3. This model of car had no options, not even the color. "You can have any color, as long as it is black!" said the company owner.

4. The designer of this car would later use much of the engine and chassis parts to build a sports car that would bear his name.

5. Which American company designed the Jeep, and who built the Jeep?

7. This small, inexpensive car was named for the chairman of Kaiser Motors.

8. These brothers sold their company to Chrysler in 1928.

9. Ford named a line of cars for the son of Henry Ford I. The son’s name?

5. Short answer: The first prototype was built by the Bantam Car Co., best known for its midget cars. Long answer: But the American military feared that Bantam (pictured) could not produce enough of them, so Jeeps were built only by Willys and by Ford, in equal numbers and using standardized parts. After the war, production went to Willys, which eventually became Kaiser-Jeep, which was later acquired by American Motors and then all of that company taken over by Chrysler, which is now part of Chrysler Group LLC.

6. The name came from saying aloud the Army’s name of "G.P.," or "general purpose" vehicle.