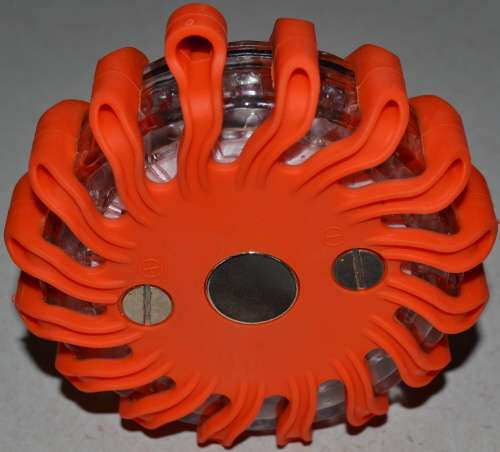 If you're unlucky enough to be stranded with a flat tire or engine trouble, the new SafetyPuck from Milwaukee-based SafetyBright will illuminate you and your vehicle so motorists up to a half-mile away can see you.
Advertisement

The new 9-in-1 SafetyPuck warning light ($39.95) fits in the palm of your hand and is shaped like a hockey puck. It has ridges and 16 LED lights inside of itself to provide you with a bunch of illumination patterns, including a flashing arrow.

The bright orange pucks are magnetic on one side. That's so you can attach them to your vehicle without harming it. Pucks also can be placed in the road to tell oncoming drivers you're there, so they can either help you or give you a wide berth. The puck runs on a charge for five to nine hours.

The lights flash or flicker and can go from pulsing to swirling. Our favorite on the test puck was the flashlight beam because it's bold and bright.

SafetyBright says in promotional materials that the puck can function from 20 degrees below zero to 130 degrees Fahrenheit. It is sturdy. The company claimed the puck could be run over by a car and not be damaged, according to manufacturer test results. We did it on a lark and found the claim to be true. The puck survived being run over by a BMW 525i with flying colors.

The puck can also be taken onto boats because it floats. Although we only tested a sample puck on the road at night, it looks like it would be a great emergency beacon to have with you on a lake if you like to go boating.

The SafetyPuck comes with a rechargeable battery. It can be charged via a home electrical outlet or in a lighter adapter in vehicles.

The manufacturer is offering the SafetyPuck (SafetyBright.com) for a limited time for $37.95, with free shipping. SafetyBright's 9-in-1 SafetyPuck is a creative way to keep you or your wife and children safe, especially if you family drives at night and your car has been acting up lately. The price is right for peace of mind, if you need it.