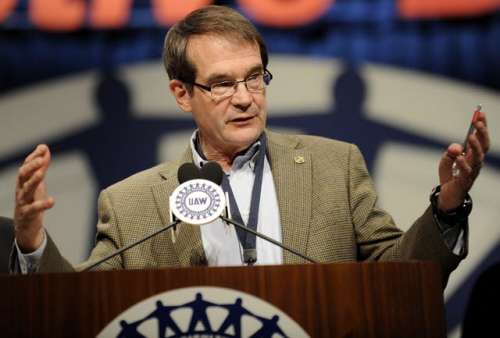 When the UAW stopped talking with Ford Motor Co. and the Chrysler Group to give its full attention to putting together a four-year contract with General Motors Co., the two smaller car companies in the Detroit Three family reacted in different ways to the interruption.
Advertisement

Ford, uncharacteristically laid back, went fishin'. No comments. No complaints. So what. Whatever, dude. We'll do it when we do it. Chrysler, the smallest of the Detroit Three, fumed. It showed its Napoleonic side, throwing a tantrum.

Chrysler CEO Sergio Marchionne's nose was so far out of joint over what he saw as a snub that he wrote a letter of disappointment to Bob King that guilt-tripped the UAW president with a scolding for being everything but late for dinner.

"I know that we are the smallest of the three automakers here in Detroit, but that does not make us less relevant. Our people are no less relevant," Marchionne said.

The auto press is sarcastically referring to the note as the "Dear Bob" letter. In it, the big boss used civilized words to articulate to King (pictured) with firmness if not fury that Chrysler was jilted for a better-looking date when the UAW dropped everything to win a new contract with GM. The strategy worked. GM gave up a lot and settled fast.

For the UAW, the delay with Ford and Chrysler by any measurement was worth it. It was a home run, securing everything from job security to pay raises to a more equitable profit-sharing deal with GM, the world's largest carmaker.

But that very large victory for the UAW doesn't faze Marchionne, who says in this letter to King that Chrysler is important, too:

Instead of writing the letter to make himself feel better and throwing it away, Marchionne sent it. His rebuke called the UAW irresponsible, in a backhanded way. The tone was that of an annoyed parent wagging a finger at a child who had eaten a cookie before dinner without permission.

Marchionne's most salient point was: "You (King) and I failed them today. We did not accomplish what leaders who have been tasked with the turning of a new page for this industry should have done."

The Detroit Free Press took note of the haranguing, asking out loud, "Is this a matter of Sergio being Sergio, the imperial globe-trotting CEO tossing a hissy fit because King didn’t drop everything to meet with Marchionne as soon as the Chrysler chief jetted into town from the Frankfurt Motor Show?”

Gary Chaison, a professor of labor relations at Clark University in Worcester, Mass., analyzed Marchionne's letter for the Detroit newspaper, saying: "It's a petulant letter, it's not a very pleasant letter, and he copied it to so many people (15) he was just asking to have it released, made public. ... One thing you do in bargaining is you never get personal ..."

OK, let's say just for fun that Chaison is right and that Marchionne should have just ignored the slight. Let's take it a step further. What is the perception from Chrysler's rank and file: Was Marchionne standing up for them like a player wrongly called out at the plate or was he being a big fat baby? Was it a gaffe by King to cancel a scheduled meeting to negotiate with Chryslers in the middle of negotiations or an overreaction by Marchionne?

Marchionne took it that the UAW was saying because the Chrysler UAW workforce is half-again as large as GM's that its contract is not as important to the union. King hasn't taken the bait, ignoring the barbs. His reaction has been nonplussed. In essence: "Yes sir, may I have another?"

Regardless, The Incident of 2011 raises the possibility that personalities, not issues, could affect whether the new four-year Chrysler-UAW contract is dragged out or is settled within a few days or a week, as Marchionne is promising. When the UAW told Marchionne in so many words to keeps his pants on so the union could take care of GM, that decision to put Marchionne and his giant ego off may have been a precursor to a protracted debate between the UAW and Chrysler over minutiae that could delay a deal until it emerges from binding arbitration.

But if everyone acts like grown-ups and it's all about what's best for the workers and the company, a fair deal can be put together faster than Sergio can say "pronto" on his cell phone.

Frank Sherosky wrote on September 19, 2011 - 10:38pm Permalink
I really like Sergio! His attitude and approach is why the press follows him wherever he goes. Regarding King, he managed to very get little back for UAW retirees while getting a sign-on bonus for line workers, but at a cost that GM can ill afford; and GM managed once again to stiff white collar retirees by giving more of the cash farm away to the UAW without paying the retirement fund first that is still underfunded. New GM my eye! And Ford still acts like wimps, afraid to upset the union. I only hope Sergio has the chutzpah not to cave.

Tesla Contemplates A New Strategy for China Retail even As Sales Boom
Jay Leno on Elon Musk & EVs: “I Think He Should Get ... Credit"
END_OF_DOCUMENT_TOKEN_TO_BE_REPLACED