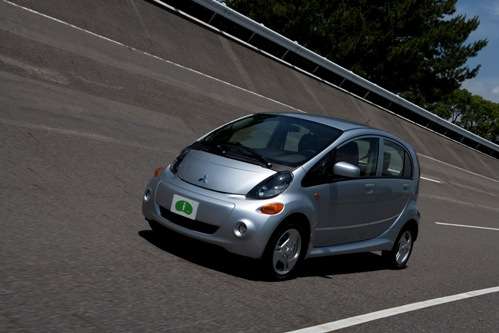 Mitsubishi has prosperous 2011, and Mitsubishi i makes 2012 even more promising

Japanese carmaker Mitsubishi remains popular with American buyers, as year-to-date sales surged 45% higher than last year through Dec. 1. No matter what happens the rest of the year, it's Mitsubishi's best year in the U.S. since 2008 with even better times ahead, with this month's debut of the 2012 Mitsubishi i electric car.
Advertisement

Mitsubishi has already sold more vehicles with more than three weeks to go in the calendar year (73,988) than it did in all of 2010, when it reported the sale of 50,809 Mitsubishis in America.

Leading the way for Mitsubishi in America is the Outlander Sport. The model had an awesome November, with 1,133 Outlanders sold. That's a lot of volume for Mitsubishi and a boost of 64.7% over last year.

November was a down month. Mitsubishi Motors North America had sales of 3,735 units. That's 13% fewer cars and trucks going out the door than in November 2010.

And there's something new, too: The all-electric Mitsubishi i (pictured) began appearing on showroom floors of dealers on the West Coast last month. Buyers can take delivery of the i this month. In some cases, presumably for Christmas gifts.

Mitsubishi is excited about the 2012 Mitsubishi i electric vehicle in part because it has scored first-place honors on the EPA's list of Fuel Economy Leaders: 2012 Model Year.

The rating was released in the EPA's Fuel Economy Guide and is EPA-rated 112 combined / 126 city / 99 highway miles per gallon equivalent.

"We are very pleased," said Yoichi Yokozawa, president and CEO of Mitsubishi Motors.

“With 17,000 i-MiEV-based units produced for various international markets, we look forward to providing North American consumers with an exceptionally well-engineered electric vehicle that has proven itself to be reliable, safe, efficient and very affordable in overall price and cost of operation.”