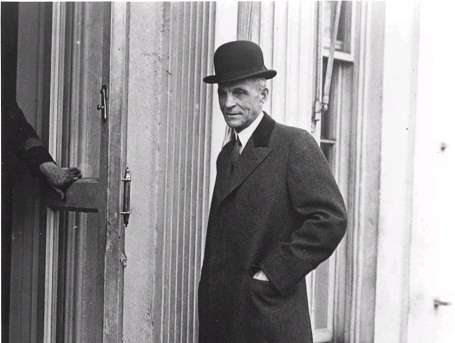 How did the Detroit Three of Ford, GM and Chrysler get their names?

Here is a primer on the American car companies and how they got their names. We start off with Ford Motor Co., which was named after founder Henry Ford, who is pictured.
Advertisement

Chevrolet was named after company co-founder Louis Chevrolet, a Swiss-born auto racer. Buick is the brainchild of founder David Dunbar Buick; Oldsmobile, after founder Ransom E. Olds; and the now-defunct Pontiac Motor Company, after the Michigan city in which it was founded, by Edward M. Murphy.

Cadillac has the distinction of being named after the founder of Detroit, the 18th century French explorer Antoine Laumet de La Mothe, sieur de Cadillac.

Chrysler Group was founded by Walter P. Chrysler. Former German partner Daimler was created by Gottlieb Daimler. Together they once owned Mercedes-Benz, Dodge, Jeep and the now-defunct Plymouth and DeSoto nameplates.

Dodge Motor Company was so named by founders John and Horace Dodge.