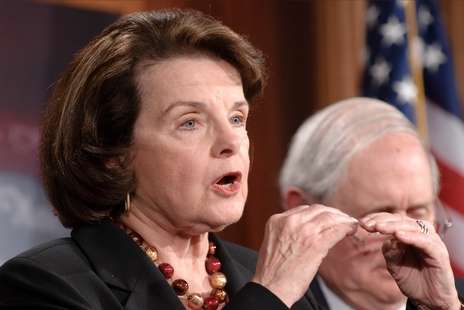 A Republican senator from Oklahoma and a Democratic senator from California sought Tuesday to end a $6-billion, 30-year-old subsidy of ethanol by July 1, but the proposal was resoundingly defeated by the U.S. Senate, 59-40.
Advertisement

If the Ethanol Subsidy and Tariff Repeal Act introduced by Sen. Dianne Feinstein, the California Democrat (pictured), and Sen. Tom Coburn, a Republican from Oklahoma, would have passed, it could have saved U.S. taxpayers $3 billion this year alone.

Despite the defeat, opponents of the subsidy have hope. "We’re so close to ending these wasteful, expensive subsidies to dirty corn ethanol," said Kate McMahon, biofuels policy campaigner for the Friends of the Earth organization, which has offices in San Francisco and Washington, D.C.

The Oklahoma senator blasted colleagues, mostly Democrats, for being shortsighted.

“The senate’s refusal to save taxpayers $3 billion by ending an ethanol subsidy the beneficiaries themselves don’t want highlights the incompetence and dysfunction of this body. Many senators who opposed this policy refused to end it because senate Democratic leaders were upset about being forced to take a tough vote. Instead of protecting taxpayers by reducing our deficit and lowering food prices, many senators chose to protect the desire of senate leaders to avoid tough issues. Taxpayers obviously need to give the Senate another refresher course on who runs government,” Coburn told reporters today after the vote.

"Taxpayers should be encouraged that Republican senators overwhelmingly rejected the ludicrous argument that eliminating tax earmarks is a tax increase. Tax provisions should be examined on a case by case basis, not receive blanket amnesty. I’m proud so many of my Republican colleagues put common sense, good judgment, and free-market conservative economic principles ahead of political expediency."

The impact is that the U.S. is in line now to spend $6 billion on one subsidy for corn ethanol this year. This money does little to nothing to actually boost ethanol production because the industry is already supported by federal mandates for biofuel consumption, McMahon said.

"Ethanol is the only industry that benefits from a triple crown of government intervention: its use is mandated by law, it is protected by tariffs, and companies are paid by the federal government to use it. Ethanol subsidies and tariffs sap our budget, they’re bad for the environment, and they increase our dependence on foreign oil. It’s time we end subsidies that we cannot afford and tariffs that increase gas prices," Feinstein said in a statement on her Web site.

The bill would have eliminated a 45-cent-a-gallon tax subsidy provided for producers of ethanol and deleted a 54-cent-a-gallon tariff on imported ethanol. Ethanol is a corn-based alcohol that is an additive to gasoline.

"The ethanol subsidy and tariff is bad economic policy, bad energy policy and bad environmental policy. As our nation faces a crushing debt burden, rising gas prices and the prospect of serious inflation, continuing our parochial ethanol policy that increases the cost of energy and food is irresponsible," Coburn said in a statement before the vote on what he called his "common sense bill."

The Big Oil and corporate agribusiness interests behind the biofuels industry want ethanol tax credits, as well as taxpayer-funded pumps, tanks and pipelines for corn ethanol.

To counter the biofuels industry’s power, Friends of the Earth will continue to work with a "large and diverse" coalition to end the subsidies, McMahon said.

Zadoc wrote on June 14, 2011 - 8:45pm Permalink
Ethanol subsudies line the pockets of the wealthy and drive up the prices of food. POLL: Should Ethanol subsadies be ended? Vote: http://www.wepolls.com/r/811335