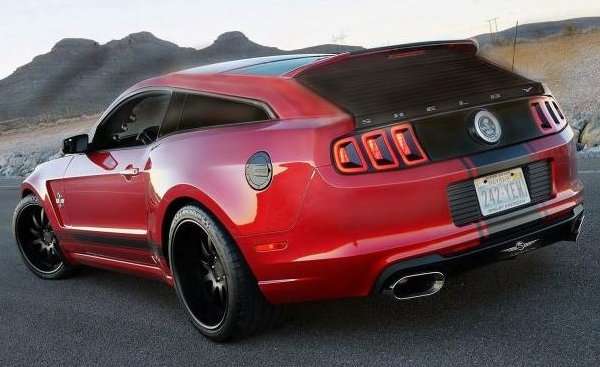 The image shown above began circulating heavily through the social networks yesterday morning, showing what was very obviously a photoshopped image of the 2014 Ford Shelby GT500 Mustang converted into a 2-door sport wagon. While the artwork is pretty good, you can tell by the fuzziness around the unique extended roofline that this is indeed an artist’s rendering of a GT500 Mustang wagon and because of that, many quickly passed this off as yet another photoshop image that will never go any further than internet lore. The images that I saw yesterday morning showing the Mustang wagon did not include any mention of the Strand Craft name so – like so many others – I laughed at the idea of a GT500 wagon and went on with my day. However, it has been made official by yacht builder Strand Craft that they will produce one Ford Shelby GT500 Mustang Sport Wagon for sale to someone who will likely have very, very deep pockets.

Strand Craft hasn’t offered up a whole lot of information on their plans to build a single Ford Shelby GT500 Mustang Sport Wagon but the company has stated that it will pack 850 horsepower and when you consider the Super Snake logos behind the front wheel in the rendering above – the top of the line Shelby Super Snake package will likely be the root of this mighty Mustang wagon. This means that not only will there be a GT500 Mustang wagon but it will likely be a GT500 Super Snake Mustang wagon. Strand Craft has also stated that they will not build the Mustang Sport Wagon, instead calling upon a "world-renowned car builder in Los Angeles”. This custom Mustang will haul more cargo than any Mustang ever and it will do it while being able to run from 0-60 in just 3.3 seconds.

In addition to the high performance Shelby-tuned drivetrain and the unique roofline, the Strand Craft Ford Shelby GT500 Mustang will wear a set of Recaro race seats, tons of leather throughout the cabin and a 1,000 watt McIntosh sound system so this Mustang will be remarkable in a variety of ways.

While the idea of a Ford Mustang wagon (particularly a Shelby GT500 Super Snake model) is nothing shy of brutal blasphemy to many Mustang fans, I think that the car shown above actually looks pretty cool. I mean, Ferrari has no problem with their 2 door sport wagon FF model selling out so there is obviously a high end market for a very powerful 2-door wagon but there is a big difference between the Ferrari FF and a one-off custom GT500 Mustang wagon. Even though the reality of a Mustang wagon will enrage some hardcore enthusiasts, there is little doubt in my mind that this unique high performance Mustang will sell in a hurry when it goes up for sale in April.

While I understand how some Mustang fans wont like seeing a wagon version of the legendary pony car, I think that this could be a pretty sharp looking car when it arrives next year. What do you think of the GT500 Sport Wagon? Tell us in the comment section below!