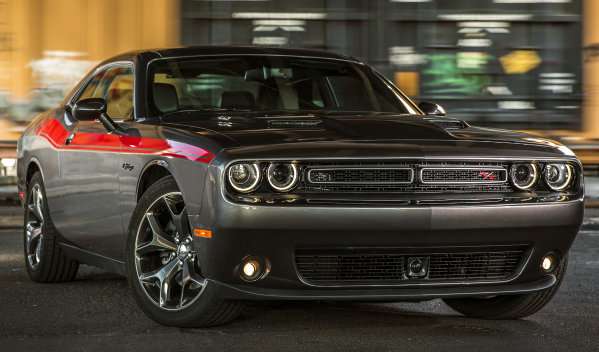 The 2015 Dodge Challenger SRT Hellcat is one mean looking muscle car with 707 horsepower to back up those looks as the most powerful American production car ever so it is hard to find something not to like about this super-Challenger – the fact that the 1971 inspired grille of the 2015 Challenger lineup isn't available.
Advertisement

When the 2015 Dodge Challenger was introduced at the 2014 New York International Auto Show, it wasn’t as different as some people had hoped and expected. In fact, the changes to the outside of the 2015 Challenger are restricted largely to the new front and rear end, both of which feature styling inspired by the 1971 Challenger. For some critics, it wasn’t enough but for others (like myself), it was a great evolutionary step in the right direction. However, while the Hellcat gets the same dual LED racetrack taillights, it does not wear the new grille design.

The Hellcat Gets a Special Front End
While the majority of the 2015 Dodge Challenger lineup including the SRT 392 will sport a new grille that has a dual unit design similar to the 1971 Challenger, the 2015 Challenger SRT Hellcat will continue to use a grille design similar to the 2008-2014 models. In fact, the entire front fascia is unique to the 707 horsepower Challenger, as the face of the Hellcat models was engineered to make sure that the blown Hemi was kept cool and well fed at all times. The front end also features a design that is more well equipped for the crazy speeds that can be reached by the Hellcat Challenger.

Where the rest of the 2015 Dodge Challenger models have the new dual unit grille, the Hellcat Challenger has a large open area and even the portion of the fascia around this large opening is unique, with a “ramp” design helping to direct the air headed into the engine bay. The lower grille opening is also unique, being far bigger than any of the lower fascia openings on any other modern Challenger, further helping to bring in plenty of cool air at high speed. On the outsides of that large lower central openings is a pair of openings that help to cool the front brakes while the aggressive chin spoiler wrapping around the lower edge of the front fascia helps to improve high speed downforce. It looks pretty awesome, too. Overall, the look of the 2015 Dodge Challenger SRT Hellcat is distinctly its own, standing apart from even the SRT 392 that carries the new grille and a lower fascia design that is similar to the current Challenger SRT.

The 1971 Grille Design Won’t Fit
Upon noticing that the new 1971-esque grille was not included in the 2015 Dodge Challenger SRT Hellcat design, I asked one of the Chrysler reps on hand if it was possible to swap in the grille from the rest of the 2015 Challenger lineup. After all, I am sure that at least one deep pocketed Hellcat owner will want his or her 707hp Challenger to stand out while also preferring the “new” look of the 2015 front end. Unfortunately, the slight differences in the front fascia of the SRT Hellcat model will prevent someone from simply buying the grille out of a non-Hellcat 2015 Challenger and installing it.

This means that if you love the 1971 inspired grille of the 2015 Dodge Challenger, but you are set on buying one of the 707hp Hellcat models, you will have to either make a compromise somewhere (presumably giving up on the grille design) or you will have to pay a custom shop what will likely be a fair amount of money to have the non-Hellcat grille modified to fit the SRT Hellcat Challenger. Even then, adding the more restrictive grille could impact performance so it probably isn’t a great idea to mess with the air flow pattern set forth by the engineers.

The 1971 design grille on the 2015 Dodge Challenger SXT, R/T, Scat Pack and SRT 392 is awesome – but not as awesome as the 707hp SRT Hellcat and having driven the Hellcat, I can say that compromising on grille design is worth the fun of the supercharged Hemi.

Gary Senger wrote on January 4, 2015 - 7:58pm Permalink
I am glad you dont like it better chance for me to get one
David Bush wrote on May 15, 2015 - 2:29pm Permalink
I have a 2015 scat pack we love I see people wanting to put the rt grille in hellcats but I like the hellcat grille and would like to know if it would fit in the scat pack the look the same dementions in the picture I have from e-bay but would like to know if it is possible to do this. Thanks : Dave & Vicki Bush
Joel wrote on November 9, 2017 - 4:58pm Permalink
Thats totally backwards I own a 2016 ScatPack and hate the 71 inspired grill like most people. the 71 along with the 72-74 Challenger grills have always been looked down upon by the Mopar community. 70 is the golden child that everyone wants. though the 71 taillights were Meh the new redesign of these is a much better design than the 08-14's. Ive seen a Few Non-Hellcats with the grills swapped, so its not impossible like you article states. looking into swapping mine currently to a Hellcat grill. a much meaner look.